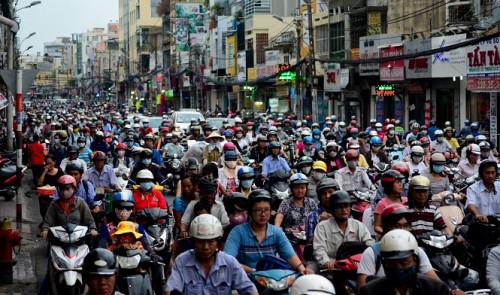 The Vietnamese Ministry of Transport on Thursday said it will urge the government to stop the collection of annual road maintenance fees from motorbike owners. Minister of Transport Dinh La Thang has ordered his ministry’s relevant agency to finalize a report to submit to the government a proposal to halt the collection, pending an amendment to Government Decree 18, which governs the fee charging. At a meeting held by the ministry on Tuesday, Le Hoang Minh, chief of the office of the central road maintenance fund, said that 32 local authorities had been asked for opinions on whether the fee should be maintained or not, and 30 of them answered the fee should continue to be collected. Authorities in Dong Nai and Ba Ria-Vung Tau Provinces suggested that the fee should be abolished, Minh said. However, Minister Thang told the meeting that the collection of this fee is facing many difficulties, so his ministry and the Ministry of Finance will propose that the government scrap the fee. Regarding this issue, Bui Duc Hieu, chief of the secretariat of the Hanoi People’s Council, said local authorities support the viewpoint of stopping the collection of the fee. The fee collection in Hanoi has faced many difficulties and its efficiency is therefore low, Hieu said, citing a recent supervision report. Hanoi People’s Committee chairman Nguyen The Thao also said residents of the capital have suggested that the government abolish the fee. Many other local authorities have also said “no” to the fee. The People’s Council of the south-central province of Khanh Hoa on Wednesday issued a resolution to halt the fee collection as of July 19, 2015. Earlier, the People’s Council of the central city of Da Nang made the same move, which came into effect on July 7. Meanwhile, the Ho Chi Minh City People’s Council earlier this month requested that the city government not collect road maintenance fees from motorbike owners until the council finishes reviewing all relevant reports on applying the collection. The municipal administration was required to prepare such reports and postpone the fee collection, the council said in its request. The reports should detail the plan and method of fee collection and its possible efficiency, as well as the advantages and disadvantages, the council said. During the ninth session of the National Assembly that ended on June 26, many deputies also proposed that the annual road maintenance fee should be reviewed, and even scrapped if found unreasonable.

“Many people told me that it is extremely absurd to ask them to pay the road maintenance fee when they ride their motorbikes on roads that have been built on land they had donated and with money they had contributed,” Nguyen Thi Quyet Tam, a deputy and the chairwoman of the Ho Chi Minh City People’s Council, told a meeting on May 29. Local governments nationwide should be authorized to decide whether any fees and charges should be collected and at which rates, because only grassroots administrations can clearly know the actual conditions of each locality, Tam said. Agreeing with Tam, many other deputies suggested that the Ministry of Finance re-examine this fee and propose that the government drop it. “People’s councils should be authorized to decide whether a fee or charge should be collected from local people or not, and those councils will be responsible to residents for their decisions,” Nguyen Van Minh, a deputy from Ho Chi Minh City, said.