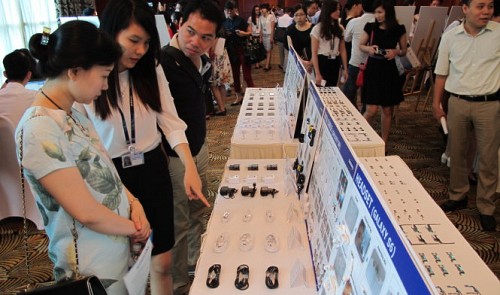 In 2014 many local suppliers lamented they had little chance to be part of Samsung’s production in Vietnam, and the situation remains nearly the same one year on.

Samsung, which runs seven projects worth nearly a dozen of billions of U.S. dollars in the Southeast Asian country, has repeatedly affirmed it always welcomes local businesses to join in the production chain.

On Wednesday, the Vietnamese unit of the South Korean electronics titan organized an exhibition and conference on support industries in Hanoi, where more than 200 local businesses got to know what Samsung expects from them.

Samsung Vietnam publicized a list of spare parts and components it is seeking suppliers for, but Vietnamese businesses again said they are unable to grab the opportunities, explaining they are less competitive than foreign-invested suppliers.

To date, only four Vietnamese firms have been contracted to directly supply parts to Samsung, according to Jang Ho Young, deputy manger of procurement with the Samsung production complex in the northern province of Bac Ninh.

Samsung has placed orders worth around $45 million with these companies, known as the ‘primary suppliers,’ Jang said, adding the figure last year was $35 million.

There are also 28 secondary suppliers, which provide parts for the four primary ones.

In July 2014, Samsung publicly called on local businesses to become its suppliers, but there were very few qualified candidates, Jang said.

After nearly a year, there is only one Vietnamese business under consideration to become a primary supplier, and eight others stand a chance of being selected as secondary suppliers, the Samsung official elaborated.

The Wednesday event was intended to seek more qualified suppliers, which are required to have ISO-certified products, competitive prices and the ability to fulfill large orders.

Samsung is looking for suppliers for around 200 components for ten mobile phone models and four other electronic devices, according to Jang.

Some Vietnamese businesses attending the event said if a domestic and a foreign firm are supplying the same product to Samsung, the latter has more advantages thanks to many preferential treatments the government offers to lure international investors.

“While Vietnamese businesses have to pay high land leasing fees, the charges are very low, or sometimes exempted, in the case of foreign firms,” Nguyen Van Hoa, deputy director of the HTMP Vietnam Co. Ltd., a mechanical firm, said.

“The production costs of the Vietnamese suppliers are thus higher than those of their foreign rivals, which makes them less competitive in terms of prices.”

The Vietnamese government has in fact issued policies to support local suppliers, but its accompanying incentives seem inaccessible, insiders complained at the conference.

“It’s hard to access the incentives of the government, while the preferential treatments for foreign businesses are huge and always available,” Nguyen Minh Ngoc, general director of Thang Long Co., a packaging firm which was among the very first Vietnamese suppliers to sign contracts with Samsung.

Nguyen Tien, director of TDBH Co. Ltd., a Bac Ninh-based mold supplying firm that is a secondary supplier for Samsung, also said Vietnamese companies are the 'underdogs' in the game.

“While my company had to make heavy investment to win a contract with Samsung, we were not entitled to soft bank loans,” he said.

Pham Anh Tuan, deputy head of the heavy industry department under the Ministry of Industry and Trade, admitted that many incentive policies of the central government are still inaccessible to local suppliers.

“In the future, those Vietnamese suppliers will be able to enjoy the highest incentives,” Tuan said, elaborating that the preferential treatments include a four-year corporate income tax exemption.

However, the official admitted that these incentives “are only proposals in documents being drafted by the ministry.”

Samsung Vietnam general director Han Myoung Sup said the company welcomes suppliers regardless of where they come from, in rejecting allegations that the electronics behemoth favors those from South Korea.

He said Vietnamese suppliers should keep trying to meet the requirements set by Samsung, after which it will be no big deal to become part of the company’s production chain.

Since initially investing in Vietnam in 1995, Samsung has operated seven projects worth a total of $11.3 billion in the Southeast Asian country.

The two biggest among these are the Samsung complexes in Bac Ninh and Thai Nguyen, both northern provinces, into which the company has so far channeled $2.5 billion and $5 billion, respectively.