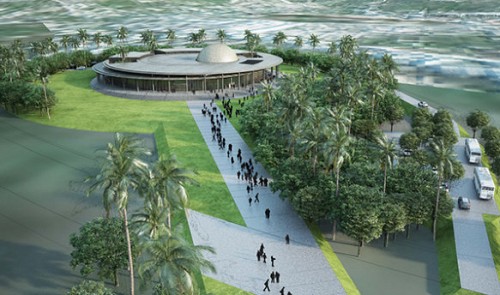 Construction work of a science complex that costs nearly US$8 million to build is slated to begin in the south-central Vietnamese province of Binh Dinh next week, local authorities said.

The groundbreaking ceremony of the science complex, located on Quy Hoa beach in the province's capital city of Quy Nhon, will take place on July 20, the provincial administration said at a press meeting on Friday.

The total cost for construction is more than VND171 billion (US$7.85 million), which will be funded by the state budget, according to the plan approved last year by the prime minister.

It will consist of three parts, including a planetarium, a science museum and an astronomical observatory.

The 3.8ha complex, a round-shaped structure surrounded by rows of coconut trees, is designed by French architect Jean - Francois Milou, who also designed the nearby International Center for Interdisciplinary Science Education of the Meet Vietnam Organization.

The science complex is expected to be put into operation in 2017.

It is inteded to provide a public space of science in Vietnam with the focus on transferring science to the public and growing people’s love of science, especially among young generations, the Binh Dinh administration said in the press release on Friday.

The complex is hoped to be used not only for science education but also for scientific tourism development.

On the occasion of the groundbreaking of the complex construction, the Meet Vietnam Organization will also organize five international scientific conferences on physics as well as workshops on astrophysics, and particle physics from July 19 to August 22.

The events will be attended by reputable scientists including Nobel-winners Jerome Friedman and George Smoot, and well-known Vietnamese – American Professor Luu Le Hang.

Prof. Jerome Friedman was awarded the Nobel prize in Physics in 1990 and is working at the Chicago University.

Prof. George Smoot received the Nobel prize in Physics in 2006 and is working as professor at California University and senior researcher at Lawrence Berkel National Laboratory in America, as well as professor at the Paris Diderot University in France.

Born in 1963, Prof. Hang received numerous awards such as the Shaw Prize - regarded as the "Nobel of the East" - in 2012, and the Kavli Prize in Astrophysics - considered the "Nobel of Astronomy" the same year.

She is working at the Department of Astronomy at Harvard University and the Lincoln Laboratory at the Massachusetts Institute of Technology (MIT).

Moreover, Tuoi Tre (Youth) newspaper will collaborate with the Binh Dinh administration and the Ministry of Education and Training to host an online exchange on science for interested readers.

The exchange is expected to take place at the International Centre for Interdisciplinary Science and Education on August 18.