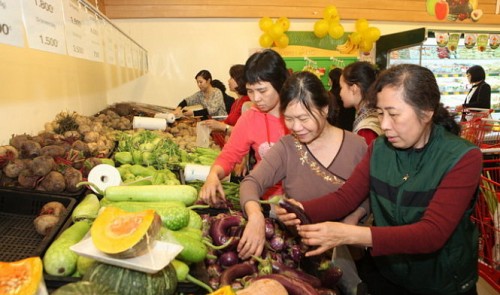 Survey finds less than 20% of Vietnamese satisfied with economy

The satisfaction of Vietnamese people with the national economy has fallen to a worryingly low level, the latest survey conducted by the Vietnam Chamber of Commerce and Industry (VCCI) and the World Bank finds.

Only 19 percent of the respondents in the “People’s Satisfaction about Vietnam’s Government and Market” survey said they were content with the current economic situation, the VCCI said at a ceremony in Hanoi on Thursday.

Those with the highest satisfaction level are working at National Assembly agencies and local administrations, said Dau Anh Tuan, head of legal affairs with the VCCI.

“The satisfaction rate has dropped to very low,” the report stated.

As many as 47 percent of those polled said they were concerned, and even depressed, about the widening gap between the rich and the poor in Vietnam.

Still, 63 percent of those surveyed said they were upbeat about a better life for the next generation.

The survey was conducted in 2014, polling 2,300 businesses and 4,000 individuals, including high-profile state officials, journalists, and retired and unemployed people.

But there were only 1,643 respondents in the end.

Twenty-nine percent of the respondents considered Vietnam’s transformation into a market economy in the past five years as “fast,” whereas 36 percent said the process was slow.

“Obviously the transformation is still going, but at a speed that is much slower than expected,” Tuan admitted.

While Vietnam has repeatedly called on other countries to recognize its market economy, even the Vietnamese are divided when it comes to considering the status of the national economy.

“If five say Vietnam basically has a market economy, four others will say it is still a state-regulated one,” Tuan said.

The survey also asked respondents for their satisfaction in four sectors, namely public transportation, healthcare, education and notarization, which people have to access every day, according to World Bank senior expert Doan Hong Quang.

Transport and healthcare were at the bottom of the list, with only ten and 11 percent of the respondents, respectively, saying they were satisfied with those services provided by the state.

The satisfaction rate for services run by private entities were much higher, 30 percent for transportation and 45 percent in the case of healthcare.

In the meantime, 26 percent said they were satisfied with the notarization service provided the government, while the private sector received the highest satisfaction rate, 46 percent.