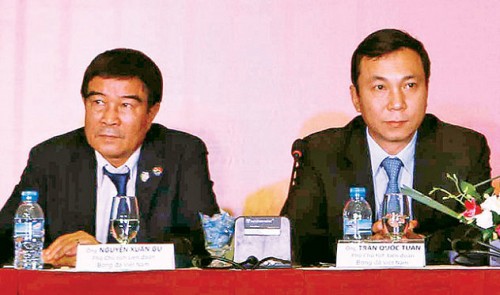 Vietnamese football has been spoiled by a lack of solidarity among leaders, the intervention of the state, and match-fixing during the seven terms of the last 26 years.

Problems emerged at the beginning of the first term in 1989 and have hindered the development of Vietnamese football since.

It was not for money back then, but merely for relations between clubs, Chi said, adding that the phenomenon was commonly called ‘sentimental football.’

All clubs were then subsidized by the state and those who were relegated got less investment, he said.

So clubs maintaining good relations with one another tended to help give points by intentionally losing to or drawing with ‘rival’ teams.

Throughout the seven terms of the last 26 years, the poor management of domestic football has remained unchanged thanks to the intervention of the government, Chi said.

It is a result of the fact that many clubs have been unable to ‘survive’ independently on their income from ticket sales, advertisements, and sponsorships.

In reality, many clubs are still funded by the state’s budget.

Even those teams considered able to stand on their own feet still rely on the business results of sponsors, Chi stressed.

If their sponsors face trouble in business, they too will be immediately entangled in trouble.

Compared to the time under total state subsidy, Vietnamese football has made progress, but it still fails to keep pace with other nations.

Along with the lack of development, problems like consistent disciplinary violations and match-fixing have continued to rise, Chi noted.

The election of officials to take the helm at the VFF has long been influenced by the state, who decides on all the major appointments at Vietnamese football’s governing body.

In short, the operation of football in Vietnam is a mixture of state management and the structure of a market economy followed by sponsor companies, according to Chi.

In addition to match-rigging and state intervention, the lack of solidarity has hampered Vietnamese football and occurred in all seven leadership terms so far.

VFF officials have frequently split into factions and fought each other instead of working to improve the domestic game.

A history of problems

In 1991, 11 footballers of the Vietnamese men’s national team abandoned their training camp as a result of a disagreement between the VFF and the coaching board.

During the second term of the VFF in 1993-97, five football clubs left the top-flight league due to fights between factions at the VFF.

In the same term, the national team’s coach, Karl-Heinz Weigang from Germany, accused his players of manipulating a 1-1 draw with Laos in the 1996 Tiger Cup. Vietnam won a bronze medal at the tournament.

In the third term from 1997 to 2001, three footballers were arrested for gambling and organizing gambling – the legal terms used for match-fixing in Vietnam.

In the fourth term from 2001 to 2005, the owner of Hoang Anh Gia Lai FC said he would sell his football club and the boss of Dong Tam Long An FC threatened to sue the VFF, both for irregularities in its player-transfer regulations.

Seven referees, a coach, and two club officials were then captured for bribery in Vietnam’s top two leagues in 2004.

This period also saw a major match-fixing scandal by Vietnamese players at the 2005 SEA Games in the Philippines.

In 2006, the head coach and assistant coach of Song Lam Nghe An FC were apprehended for manipulating the results of matches at the V-League, Vietnam’s top-flight tournament.

In the two most recent terms from 2009 till now, factional behavior by VFF officials has seriously split the association, while 15 players of Vissai Ninh Binh FC and Dong Nai FC were nabbed for match-rigging in 2014.