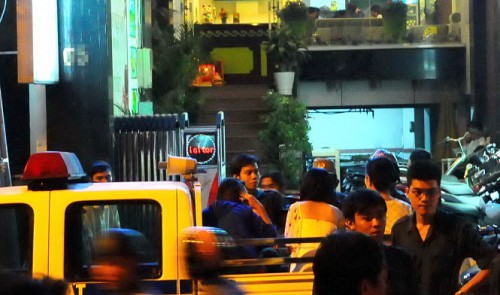 An office in charge of fighting social ills in Ho Chi Minh City has put forward a proposition regarding the designation of an area dedicated to “sensitive services,” which may easily turn into prostitution, on a pilot basis in order to better manage social evils and curb illegal sex work.

Le Minh Quy, deputy head of the Office for Social Ill Combat and Prevention under the Ho Chi Minh City Department of Labor, War Invalids and Social Affairs, announced his agency’s proposal at a meeting on Friday.

The suggestion is meant to group businesses offering “sensitive services” into a certain part in the city for easier inspection, control and crackdowns, Quy noted.

“Groups and individuals registering to do business in such an area would be entitled to incentives when it comes to house and land lease, tax payment and loan interest. They would also be supposed to strictly comply with the rules, or they would be subject to stiffer penalties,” he stressed.

Apart from criminal punishment, violators would have their businesses suspended or banned permanently.

“The highest target is to keep a tight rein on prostitution, ensure workers’ health by controlling the spread of HIV/AIDS and other sexually-transmitted diseases, and manage social order and security,” Quy added.

The official asserted that the set-up of such an area does not amount to the legalization of prostitution, which is now unlawful in any form in Vietnam.

Most districts throughout the city are home to “sensitive service” providers, including barbers, massage parlors, spas, and karaoke bars.

Attendants in many such shops, mostly women, tend to offer illegal intercourse and other sexual services, the official said.

But some are just engaged in intimate acts such as sitting close to their male clients, feeding them with food or drinks, chatting, singing or allowing the clients to touch them in non-private parts, which are not banned by law, Quy added.

“With proper control, these ‘sensitive’ businesses would be deterred from offering services that go beyond such legal intimate acts,” he elaborated.

Its geographical position, which is near the city’s downtown area, and relatively large size make the establishment more feasible, Quy said.

The outlying district of Can Gio, which has also emerged as a candidate, is much less promising due to its long distance from the city core.

Quy added that many people, including key figures, have showed support for his agency’s proposal, though they refuse to openly voice their opinions.

He added if approved, the proposition may include relocation of all households in the designated area.

If the municipal administration gives the green light to the suggestion, a detailed plan will be submitted to the central government and National Assembly for final approval.

If the assembly and government order a halt to the pilot project following its implementation, the selected area would still see the robust development of other cultural, sporting and economic activities, the official said.