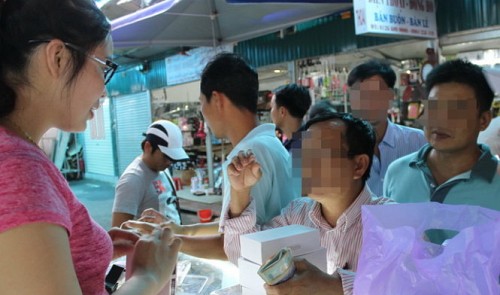 While the latest Apple smartphone models will not be officially available in Vietnam until this weekend, knock-off handsets are ubiquitous in a northern Vietnamese province bordering China, selling for less than US$90 apiece.

The fake iPhone 6S and iPhone 6S Plus devices are openly on sale at mobile phone stores in Coc Leu Market in Lao Cai City, the capital of Lao Cai Province, where thousands of tourists hunt for Chinese goods at dirt cheap prices.

The previous models of the iPhone 6 and iPhone 6 Plus fetch only VND1 million ($45) each.

The knock-off iPhones are so convincing that consumers have been finding it hard to differentiate them from the authentic products.

The fake handsets are also stored in boxes that look identical to those used for real iPhones, and the iconic Apple logo is also accurate.

“The counterfeit products were produced to look as close to the real versions as possible, so you may fail to tell which is which by the naked eye,” a woman who sells the iPhone look-alike devices revealed.

But the big difference is that the fake iPhones run Google’s Android, instead of Apple’s flagship iOS, she added.

“But whether they are durable or error-free is a matter of luck,” she said.

“The copycats are sold at throwaway prices so you cannot compare them with the authentic products.”

The vendor admitted that the knock-off iPhones can only find a market before the real handsets are officially distributed in Vietnam.

“We will have to slash the price even further when the authentic devices are available in the country,” she said.

Buyers of the fake iPhones also acknowledge that they should not expect too much from the look-alike devices.

“With such a dirt cheap price, you have to accept luck,” a tourist said after trying out an imitation iPhone 6S.

Apple officially took the wraps off the latest iPhone smartphones, its biggest money maker, on September 9.

The new 6S and 6S Plus have the same dimensions as the previous versions, 4.7 inches and 5.5 inches, respectively, but come with a better camera, faster chips, new colors and the force-sensitive 3D Touch, according to Reuters.

The devices will be officially distributed in Vietnam from November 6, with prices ranging from VND18 million ($804) to VND28 million ($1,250), depending on color and storage space.