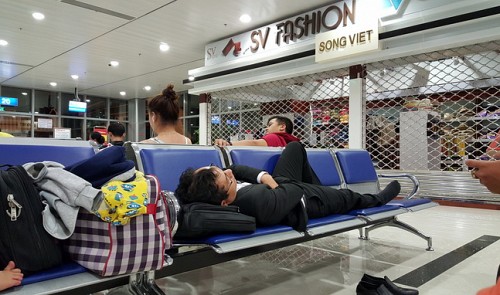 A quality assessment report conducted by the Vietnamese aviation watchdog hardly has anything positive to say about Tan Son Nhat International Airport, the country's busiest terminal.

The Civil Aviation Authority of Vietnam (CAAV) was tasked by the Ministry of Transport with evaluating the quality of the Ho Chi Minh City airport, following a groundswell of complaints from passengers, and a low ranking from a travel guide website.

The domestic terminal is therefore usually overloaded, resulting in planes having to wait longer to be able to use the runways and taxiways for landing and takeoff during peak hours.

There are not enough aprons for aircraft to park overnight, the report says, underlining the issues mainly attributable to these factors.

The CAAV report points out several other shortcomings of Tan Son Nhat, which was selected as Asia’s fourth-worst airport in 2015 by travel site The Guide to Sleeping in Airports, and urges immediate improvement.

The issues include slow connection speed of Wi-Fi services, which are almost unusable, high frequency of announcements made via loudspeaker systems, called noise pollution, and the poor quality of restrooms during peak hours.

At the same time, too few dishes are available at the airports’ restaurants, and some foods cost more than they should, according to the report.

The check-in, security and luggage scanning areas, as well as the boarding gates at Tan Son Nhat can easily become overcrowded as they are not spacious enough, the report says.

Parking is also an issue, with taxis frequently messing in front of domestic terminals, and some vehicles, mostly wearing state license plates, tending to park at preferential lanes longer than the three-minute limit.

As for the international terminal, shortcomings include the lacks of free water fountains, Wi-Fi access, and catering in waiting areas for connecting flights.

In addition some signs at the international terminal are too small and put at inconvenient locations, while there are not enough attendants to support passengers, according to the report.

The currency exchange counters at the terminal are also closed at 11:00 pm so passengers of late flights are unable to use the service.

Besides the factors Tan Son Nhat airport is itself responsible for, there are also external issues contributing to the poor quality of the airport, the report notes.

The traffic surrounding Tan Son Nhat is overloaded during peak hours, and streets leading to the airport are frequently flooded during heavy downpours, the CAAV elaborated.

“Managers of Tan Son Nhat have failed to study and apply advanced management solutions used by other countries in the management and operation of the airport,” Vo Huy Cuong, CAAV deputy chief, said.

“The airport also lacks a special force, as well as regulations and procedures, for quality assurance purposes.”

The CAAV has urged Tan Son Nhat to improve issues pinpointed in its report, as well as survey passenger satisfaction around service quality.

“The survey can be first done via public polling, and later via a quality rating system,” the aviation watchdog said in the report.