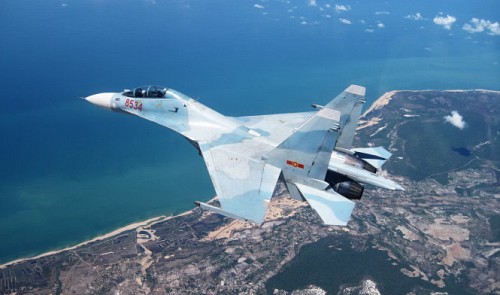 The regiment, operating under Division 370, which belongs to the Air Defense-Air Force, is stationed in Bien Hoa City in Dong Nai Province, some 35 kilometers from Ho Chi Minh City.

It is the first regiment in Vietnam that owns and operates an all Su-30MK2 fleet.

The Su-30MK2, dubbed “King Cobra,” is an improvement to the Su-30MKK, employing upgraded avionics and maritime strike capabilities.

The aircraft, developed by Sukhoi Company in 1997, is a heavy class, all-weather, long-range strike fighter, designed for dedicated use as a maritime strike aircraft as well as for air-to-air and air-to-surface deep interdiction missions.

With a rated maximum takeoff weight of 85,000 lb, the Su-30MK2 has an enhanced weapon system optimized for maritime strikes, built around the N-001VEP radar, which will target the Kh-31A ramjet supersonic anti-shipping missile, and a radar seeker-equipped variant of the Kh-59, designated the Kh-59MK2, according to ausairpower.net.

At 8:17 on the morning of one training day, some 100 aviation engineers and technicians were giving Su-30MK2 jets, worth approximately US$100 million apiece, a last check before takeoff.

Four pilots were seated inside their cockpits, ready for their mission.

The first Su-30MK2 engine roared and slowly left the hangar, followed by the second jet only seconds later.

Upon receiving a takeoff command from the control tower, the two jets quickly gathered momentum and roared into the sky simultaneously.

Among these four pilots was Colonel Tran Van Dung, chief of the 935 Fighter Jet Regiment, who was leading the group that morning.

One thing worth noting about air force operations is that once high-ranking commanders are airborne, they are still expected to strictly comply with instructions from those in charge of drill flights on that particular day, colleagues who sometimes happen to be their inferiors.

The first group took to the air at heights of 5,000 and 6,000 meters, performing complicated fighting maneuvers.

Colonel Phan Xuan Tinh, chief of staff and the drill’s commander, was busy giving oral commands to pilots and ensuring the training session was flawless.

As for the first group flight, Col. Thang, the 935 Fighter Jet Regiment’s deputy chief in charge of military training; and Col. Dung, the regiment’s chief, were seated in the back, assisting two young pilots in manipulating the aircraft.

It was the first time that these pilots, in their early 20s, had joined a group flight.

“To bring out our best for today’s drill, instructing and trainee pilots yesterday had thorough exchanges, including backup plans. It’s hard to pass on such knowledge during flight, as there are situations that only last a few minutes or even seconds,” Lieutenant Colonel Ngo Quoc Tien explained as he prepared for the second wave of airborne operations.

As planned, group two and three crews took to the air only five minutes after the first group, each carrying out a technically challenging sea attack task, which challenges pilots’ technical expertise and mental strength in the face of adversity.

In the next seven minutes, five more jets soared into the sky.

The quiet of the spacious air force base was continually pierced in this period by the deafening roars of the proud ‘King Cobras.’

At 8:58 that morning, pilots on the first two fighters received permission to land.

The second craft slowly descended to a height of 500 meters before landing.

On landing and happily shaking hands with the chief technician, a positive indication of the fighter’s working order, Col. Dung, the regiment’s chief, wasted no time in commenting on the flight performance of Nguyen Cong Hoang, his student, that morning. After completing his training mission, Hoang did not retreat to the pilots’ resting room only a stone’s throw away, but stayed on to prep for his second flight.

He was one of the crew members tasked with making three flights that day.

Home to the country’s most outstanding aviators, the 935 Fighter Jet Regiment is the only unit entrusted with training Su-30MK2 pilots for the Air Defense-Air Force of Vietnam.

All drill sessions are closely monitored by officers from the military training department under Division 370.

Col. Nguyen Van Thuan, the division’s flight overseer, who had his eyes fixed on every maneuver during that morning’s drill, said that Col. Hoi, the instructing pilot, and his student, Nguyen Van Ba, had performed the drill session’s most technically intricate task, which involved a ‘somersault’ carried out at a low altitude over the sea.

On the morning of the Tuoi Tre correspondent’s observation, the air force base was a hive of activity, with fighter jets taking off into the sky one after another, technicians getting ready for takeoffs and landings, and oxygen pumping and oil trucks always on standby.

The training session was not completed until 12:15 pm.

Soon after the energy-draining drill, the pilots gathered for a 30-minute preliminary feedback meeting before receiving detailed remarks from the regiment’s chief at 2:00 pm.

Col. Nguyen Xuan Tinh, the chief flight commander, observed that despite flying in a foggy and cloudy sky, all units coordinated seamlessly and carried out 56 successful flights.

After the pilots were assigned new flying tasks for the following day, they went to yards with illustrative air routes in groups and performed maneuvers with Su-30MK2 models in their hands.

Such painstaking preparation is not without reason.

“Su-30MK2 warplanes are the air force’s cutting-edge fighter jets and the country’s greatest asset. We keep honing our skills not only for ourselves but also for our country,” Col. Dung stressed.

“We cannot afford to leave the nation’s military unprepared for any circumstance,” he underlined.