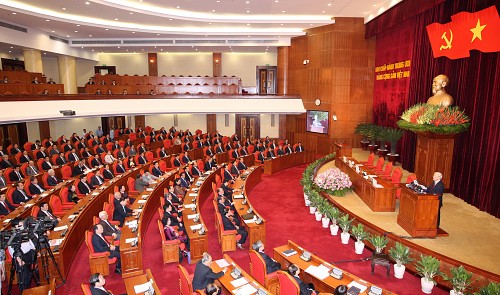 The 12th National Party Congress of Vietnam, which will take place from January 20 to 28 in Hanoi, is of great significance in setting the development orientation for the Vietnamese Party, people and military over the next five years.

The congress will capture the attention of all members of Vietnamese society as well as political commentators and observers across the globe, as it is critical for the development, image and the good of the whole nation in the coming period.

The event is slated to comprehensively address five major aspects, including establishing a transparent and powerful Party, fostering national unity, simultaneously and comprehensively boosting reform, resolutely defending the nation and maintaining peace and stability, all while creating a platform for Vietnam to soon become a modern industrialized nation.

Within the framework of the congress, the Party will review the achievements and evaluate unsettled limitations in the implementation of previous Congress resolutions, assess the leadership of last term’s Party Central Committee, and make amendments and additions to the Party’s regulations.

It will also elect a new Party Central Committee and its official and alternative members, as well as the key posts of leadership, namely the General Secretary of the Communist Party of Vietnam, Prime Minister, National Assembly Chairman, and State President, for the next tenure.

The National Party Congress marks the end of the five-year implementation of the resolutions set by the previous congress, in which considerable results have been achieved.

The average gross domestic product (GDP) growth in the previous five years increased to 5.28 percent per annum, while many economic challenges and difficulties have been overcome.

The overall economic growth, though observed lower than the preceding five-year term, is showing many signs of recovery and developing at a decent pace toward industrialization and modernization.

Constant improvement has been recorded in education and training, science and technology, culture, social security, and environmental protection, elevating living standards of the people.

The nation’s socio-politics has been stabilized, defense and security strengthened, sovereignty, peace and stability ensured, contributing to sustainable development.

All of the above mentioned accomplishments, alongside significant results in the building of the Party and political system, provide an essential foundation for a new phase of development in the upcoming period.

Due to the Trans-Pacific Partnership (TPP) agreement and Vietnam’s participation in the Association of Southeast Asian Nations (ASEAN) Community, the country can now believe in the revival of its economy, which includes growth in science-technology, product consumption and many other areas.

Vietnam’s grand event will commence amid the domestic situation in which the country is being influenced by a global economic crisis and depression, along with existing shortcomings in the national economy and limitations in leadership, causing increasing inflation that severely affects national development and the lives of the people.

The country is also making effort to battle against the devastating effects of climate change while paying extra attention to the reinforcement of defense, security and sovereignty regarding the complicated progression of the regional and international situation.

The next five-year period also marks a milestone in Vietnam’s commitment in realizing its promises to the ASEAN Community and the World Trade Organization (WTO), as well as in the deeper integration with the international community, requiring efforts by the Vietnamese government and individuals in seizing opportunities and conquering emerging obstacles.

The Vietnamese Party has pointed out the four potential threats that the country will continue to face in the next years, including the growing economic gap between Vietnam and other countries in the region and the world; the activities of opposing forces; corruption and wastefulness seen in certain officials, Party members, and public servants; and the decrease of people’s trust in the government due to income inequality and moral degradation.

Major difficulties in the protection of maritime sovereignty and the potential instability of the socio-political situation in some localities will magnify the challenges in the future.

The nine-day 12th National Party Congress, starting on January 20, will see the attendance of 1,510 delegates representing over four million Party members across the country.

The issues discussed during the congress will be kept confidential until the final day, so evaluation and comments made before the event concludes are only predictions.

The Vietnamese Politburo has gathered opinions and feedback of all members of the community to make amendments and additions to several draft documents that will be presented at the congress, highlighting the roles of Vietnamese citizens in determining matters important to the nation.

The effective preparation, the political determination of the Vietnamese people and the support from the international community will create hopes for a triumphant National Party Congress, opening a new phase of national development with effective reforms, integration and an enhancement of people’s living standards.