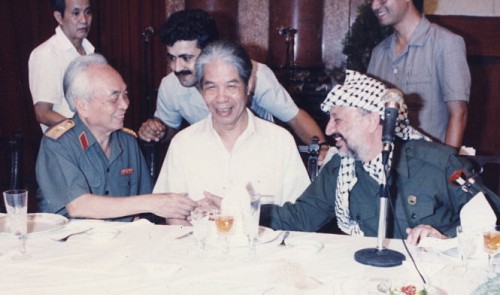 Saadi Salama, Palestinian Ambassador Extraordinary and Plenipotentiary in Hanoi, is profoundly impressed with visits to the Southeast Asian country made by late Palestinian leader Yasser Arafat, and is also keen that the Vietnamese capital’s intrinsic allure be retained.

Throughout the course of his 35-year diplomatic career, Ambassador Salama met Arafat, the late President of the Palestinian National Authority, who he and most Palestinians have held in great reverence, several times.

During President Arafat’s official visit to Vietnam in 1981, he needed someone fluent in Vietnamese to show him how to correctly pronounce Vietnamese leaders’ proper names for his Arabic keynote speech.

Then a young man, Salama was studying at a university in Hanoi and was found the best candidate for the task.

Salama also worked as an interpreter in important meetings between the Palestinian leader and his Vietnamese counterparts, including Le Duan, Pham Van Dong, Truong Chinh, Vo Nguyen Giap and Nguyen Huu Tho.

Legendary General Giap passed away in October 2013 at the age of 102, with his death deeply mourned by millions of people in Vietnam and abroad.

One of Ambassador Salama’s best memories is of President Arafat’s visit to Vietnam in June 1989, when the young man was asked to leave Laos, where he was working, to serve as the late leader’s interpreter.

As planned, President Arafat was going to depart from Pyongyang, the capital of North Korea, for Beijing and Hanoi.

However, his visit to Beijing was canceled due to the 1989 Tiananmen Square protests where student-led popular demonstrations took place in China’s capital and received broad support from the city’s residents.

President Arafat wished to continue his journey directly from Pyongyang to Hanoi, but his plane was not allowed to fly over Chinese airspace.

Meanwhile, due to a communication flop, General Vo Nguyen Giap and Salama had been waiting for the flight since noon.

It was not until 4:00 pm that the welcoming delegation received a telegram from France informing them that the flight would not land in Hanoi as scheduled.

Salama then got a phone call from the Palestine Liberation Organization, which was based in Tunisia during the 1980s.

The organization’s representative was concerned about circulating news that the president’s plane had gone missing in China’s airspace, which Salama then refuted.

The flight arrived in Vietnam the following day.

As Salama was later told, President Arafat ordered that his plane keep moving and the ground staff be informed that the Palestinian leader was on board and was bracing for an attack.

Following the reception ceremony, President Arafat attended a banquet with the host country’s leaders, who briefed him on Vietnam’s major policies, including family planning.

“Family planning is a sound policy for the Vietnamese people, but I’d rather you not comply with the policy,” the Palestinian president told Salama.

“Palestine is now in bad need of large families, which produce more talented youths, like Salama, to join our liberation efforts,” the president explained.

Salama and his Vietnamese wife later gave birth to three daughters and one son, who have all carved out success in their studies and careers.

Since graduating from the university in Hanoi and leaving Vietnam in 1984, Ambassador Salama has worked as a diplomat in many countries, including Laos, Ghana, Togo, Guinea, and Yemen.

He revealed that he was always positive that he would return to Vietnam for the special bond between the two nations and for his own destiny with the S-shaped country.

“My appointment as the Palestinian Ambassador to Vietnam is an immense honor for me,” the seasoned diplomat stressed.

“Palestinian ambassadorship typically does not last more than four years, but my tenure, which kicked off in 2009, has been lengthened and continued to date,” he noted.

The ambassador also mourns the loss of Hanoi’s cultural identity to urbanization and pollution in recent years.

He pensively recalled that when he first set foot in Vietnam in 1980, the capital’s Old Quarter had not seen the construction and population boom it sees now.

“The quarter boasted a unique allure which could not be found elsewhere in Southeast Asia,” he observed.

The diplomat remarked in fluent Vietnamese that Hanoi’s charm has waned though the hub has seen remarkable socio-economic strides in recent years.

“We still smell the distinctive fragrance of ‘hoa sua’ [one of Hanoi’s hallmark flowers] now but the way pedestrians feel has changed considerably due to exhaust fumes from vehicles,” he added.

The ambassador noted that it has become increasingly difficult for tourists to take a leisurely walk on Hanoi streets, as every inch of sidewalk is now used for shops and bike parking lots.

“Business is important, but in the long run, the local government is supposed to zone the city properly and make efforts to raise residents’ awareness in safeguarding the capital’s attractiveness like their own hearts, as Hanoi is the very heart of Vietnam,” he urged.