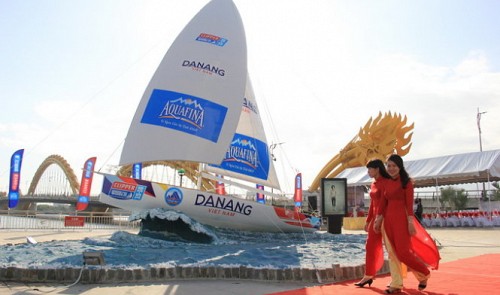 Da Nang, the tourism hub of central Vietnam, will continue attracting domestic and international holidaymakers in 2016 with a series of new attractions and products.

Tourism authorities of the city introduced its new tourism promotions at a meeting in Ho Chi Minh City on Wednesday, after a similar event in Hanoi on January 16.

This year Da Nang will inaugurate a mineral spring resort, a new museum of arts, and new tour packages on the city’s iconic Han River, according to the municipal Department of Culture, Sports and Tourism.

The Than Tai mineral spring resort, slated for opening in Hoa Vang District in April, will offer such services as mineral and mud bathing, spa, and mini F1 racing.

Tourists can also enjoy the new games and events to be held at the Asian Park in Hai Chau District, or the new 18-hole golf course at the popular Ba Na Hills resort.

New tour packages will also be launched to bring vacationers from the city’s downtown area to Ngu Hanh Son and Cham Isle via boats traveling on the Han River.

The tourism department said it will begin operating such sporting events as the Ironman 70.3 and Color Me Run on a much larger scale than previous years, while continuing to increase the number of street performances and music shows in 2016.

Da Nang’s Ironman 70.3, also known as Half Ironman, is one of a series of long-distance triathlon races organized by the World Triathlon Corporation.

On May 8, the event will take place in Da Nang, where participants will complete a 1.9-km ocean swim, a scenic two-loop 90-km bike course, and the final 21km out-and-back run course, according to the organizers.

Color Me Run is an India-inspired race where participants jog or run on a five-kilometer track and playfully sprinkle one another with the colored powder or dab the harmless substance on their friends’ faces at the end of each of the five legs.

From February 17 to 27, Da Nang will also organize nearly 20 tourism and cultural events to welcome the docking of the Clipper Round the World, a yacht race that travels 40,000 nautical miles around the globe, in the city.

Da Nang is the seventh among the 17 seaports the race will arrive during its journey through 138 countries and territories from August 2015 to July 2016. The yacht race is scheduled to reach the Vietnamese city between February 17 and 21.

In 2016 Da Nang will for the first time host a national-level fair on MICE (Meetings, Incentives, Conferences, and Events) tourism, scheduled to take place between June 24 and 26.

“According to unofficial statistics, more than half of our visitors come here for either beach tourism or MICE,” Tran Chi Cuong, deputy director of Da Nang’s tourism department, told The Saigon Times Online.

“There are a number of beachfront and riverfront hotels in Da Nang, and we want to introduce them to international tourists.”

The fair, expected to attract 150 exhibition booths and 120 foreign buyers, will not only promote MICE tourism for Da Nang, but also the central region and other localities across Vietnam, including Ho Chi Minh City, according to the official.

“Our target markets are Japan, South Korea, Australia, and the EU,” Cuong said.