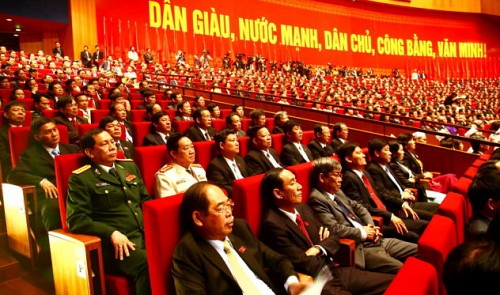 Another session of Vietnam’s 12th National Party Congress concluded on Monday, naming the official list of candidates for the membership in the 12th Party Central Committee and approving the withdrawal of other nominees.

Delegates at the ongoing congress have agreed on the final candidate list for the member positions in the Party Central Committee, including 220 nominees for the official posts and 26 others for the alternate ones.

Aside from the list of candidates recommended by the 11th Party Central Committee, members of the congress nominated 62 additional people for the official positions and 30 for the alternate.

On Tuesday, the delegates are scheduled to carry out the vote for the members of the 12th Party Central Committee, whose results will be announced at the end of the working day.

The vote will be chaired by Nguyen Phu Trong, General Secretary of the Communist Party of Vietnam, and monitored by the ballot counting committee, which is led by Nguyen The Trung, member of the 11thParty Central Committee.

The 12th National Party Congress takes place in Hanoi from January 20 to 28 with the attendance of 1,510 delegates representing 4.5 million Party members across the country.

Congress delegates will elect the new General Secretary of the Communist Party of Vietnam for 2016-20 on January 27, and the result will be announced as the grand event concludes on January 28.