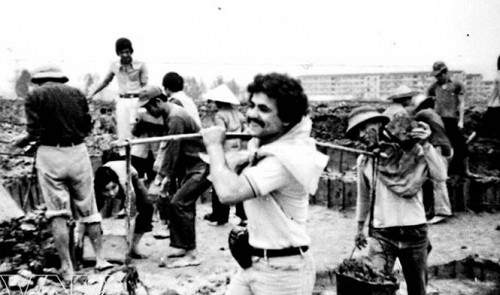 Editor’s note: A revered Vietnamese journalist and researcher on the Middle East has written to Tuoi Tre (Youth) newspaper about his experiences with Saadi Salama, Palestinian Ambassador Extraordinary and Plenipotentiary in Hanoi, during their field trip to Palestine some years ago.

Nguyen Ngoc Hung has conducted extensive research on the Arab world, the Middle East and Islam over dozens of years, and been on intimate terms with ambassadors from these countries.

Also a respected journalist, he studied Arabic in Egypt and Iraq in the early 1960s.

Below is a condensed translation of what he had to share with Tuoi Tre regarding his and some other Vietnamese colleagues’ memorable trip to Palestine in 2011.

The visit was a brainchild and personal effort of Palestinian Ambassador to Vietnam Saadi Salama Tomeizy.

We address him as ‘anh’ (older brother) or even ‘Saadi’ thanks to his intimacy with us from the beginning of our relationship.

His amicability is also manifest in how he organized the tour and accompanied us in every single activity during our stay in the Middle Eastern country.

Saadi is a seasoned professional who had undertaken various diplomatic positions in other countries since the 1980s until he embarked on his ambassadorship in Vietnam in late 2009.

The ambassador descends from the Tomeizy lineage, famous for fighting against Israeli occupation, in Hebron, a city in the West Bank territory.

Saadi himself was a ‘fidain,’ or a commando or guerrilla, in particular an Arab commando operating in the Middle East, when he was less than 20 years old. His familial background and his country’s plight of being invaded have armed him with qualities typical of a patriotic activist.

Saadi never minded arduous work and was always willing to help us out and even served as the interpreter for the delegation.

The ambassador’s intention of organizing the trip was to allow the Vietnamese media to see with their own eyes the untold misery endured by a people who have been under oppression and occupation over the past 63 years. His long-cherished trip was also meant as a once-in-a-lifetime ‘battlefront’ field trip for the Vietnamese reporters.

Our agenda did not include meetings with somber-looking statesmen or prearranged political activities.

It was all about exchanges with officials who used to be combatants or ordinary people.

Included was an informal meeting with a high-ranking advisor to the late Palestinian leader Yasser Arafat whose scars from battle and imprisonment were easily noticeable.

He welcomed us at his home in Areeha City, known internationally as Jareco, as if he were receiving comrades he had not seen for a long time.

The advisor, along with other living witnesses who had been imprisoned for years by Israeli troops and are now leading a serene life in the idyllic countryside, gave us kin-like welcomes    even though Saadi had made appointments with them at such short notice, while we were driving from one place to another.

We also visited refugee camps, where Palestinians expelled from their homeland since 1948 or during the 1967 war were taking asylum in.

There we bumped into fathers whose teenage children were shot dead by Israeli troops, and mothers whose sons were being jailed by the invasive force for taking part in demonstrations against and throwing stones at Israeli soldiers.

Saadi carefully orchestrated our itinerary so that we could witness the most suffering.

We saw Jewish settlements which sat defiantly atop hills and were enclosed by barbed wire on Palestinian land and tracks which invasive patrollers had exclusive access to.

We also caught sight of expressways with entry restricted to Jews, leaving locals no choice but to take longer detours.

We also caught a glimpse of expressway sections which were shared by both occupants and natives, but Israeli automobiles always enjoyed priority at intersections.

Saadi also discreetly promoted his country’s cultural and cuisine identity by replacing our tedious buffets at Movenpick Hotel with fun-packed picnics which also offered insights into the Palestinians’ pastoral lifestyle.

The food was all prepared by kind-hearted hosts and hostesses in gaudy dresses themselves.

During such etiquette-free meals, the hosts and guests all picked up their morsels with their hands in Palestinians’ traditional style, and gulped down water directly from bottles.

Thanks to Saadi’s good organizing skills, we could hug and kiss Palestinian men, and take photos of naïve kids and young women with angelic faces.

Our trip would not have been such a success but for the ambassador’s versatile role as the organizer, guide, presenter, illustrator and interpreter.

Saadi is also a humorous, witty man who often cracks jokes in his impeccable Vietnamese and knows how to avoid obscene words.

He was so busy escorting our group that there were times when he could not answer his wife’s continuous calls from France.

The climax of our field trip was Saadi’s yielding to our request in taking us to a demonstration against Israeli occupation which took place in the outskirts of Ramallah City.

There we Vietnamese journalists were ‘treated’ to ultimate first-hand experiences with pungent tear gas and smelly water cannons from the oppressors.

During the event, Saadi returned to his combatant nature when he and some others led the ralliers with Palestinian flags fluttering in his hands, all the while continuously vomiting from tear gas.

How important is it to encourage your children to read?