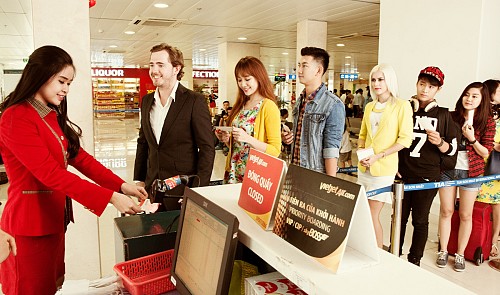 A budget carrier on Monday started giving away one million tickets priced from zero dong, in a campaign launched to embrace the Tet, or Vietnam’s Lunar New Year, holiday.

The program, running until Wednesday, is applied to all of Vietjet’s domestic services and international routes connecting Seoul, Taipei, Singapore, Bangkok and Yangon, with departures from February 16 to March 31, excluding public holidays, according to the airline.

The program is part of the low-cost carrier’s famous promotion “It is time to Vietjet.”

This year Tet falls on February 8, and millions of local people working or studying in big cities such as Hanoi or Ho Chi Minh City would return to their hometown to be reunited with their families and celebrate the country’s biggest holiday.

Vietjet, having carried more than 20 million passengers to date, boasts a fleet of 32 aircraft and operates 200 flights a day.

It has already opened 44 routes in Vietnam and across the region, taking passengers to Thailand, Singapore, South Korea, Taiwan, mainland China and Myanmar.