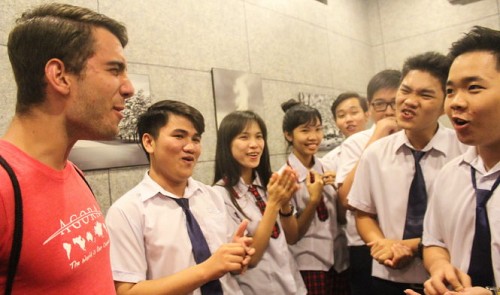 Believing that English grammar points taught in textbooks are unlikely to help students speak the language fluently, one Ho Chi Minh City high school is taking theirs out for more realistic lessons.

After classes from Tuesday to Friday, students from An Duong Vuong High School board school buses to District 7, one of the city’s expat hubs, where they freely chat with foreigners at a comfortable café.

In what has become a typical lesson scenario, Anna, a 21-year-old from the U.S., is surrounded by some 30 students eager to practice their English skills.

The students take turns to introduce themselves to their American friend and talk about their homeland, plans and dreams. The meeting goes on to include word guessing games meant to help the Vietnamese students enrich their English vocabulary.

One of the students then invited Anna to try keo dua (coconut candy), a local delicacy the American girl admitted she had never tried before. Tran Nhut Tien, an 11th grader, quickly told her that “it is a specialty of Ben Tre Province in the Mekong Delta.”

“We have here today my friend Vy, who comes from Ben Tre. So please tell us about this kind of candy in brief, Vy,” Tien continued, engaging his friend in the conversation.

Vy was at first shy to speak in front of the crowd, but with encouragement and some hints from her friends, the student stood up and began her brief presentation of the candy from her hometown.

“Keo dua is made of coconut and sugar, and sometimes added with durian flavor. It may also stick into your teeth while chewing,” she said.

In return, Anna gave the students two bags of Pop Rocks, candies that pop in the mouth. The American said that it was the kind of candy she grew up with in Ohio.

She also compared the weather in Ho Chi Minh City to her hometown, surprising many students by admitting that she once suffered heat stroke when she first arrived in Vietnam.

The meeting continued as the participants talked about their dreams and hopes for the future.

Anna had to leave the meeting early, but Louis Kaloger, another U.S. tourist, quickly filled her place.

The newcomer was immediately greeted with a number of questions from the Vietnamese students.

Kaloger said he was happy to see the students there, and spoke highly of their studious attitude and confidence in talking to foreigners in English.

Ngoc Nhu, one of the students, said the English class at the café helps her learn more than just the grammatical points being taught at school.

“I have become more confident and [have] learnt many new words and interesting things about the culture of other countries through these lessons,” she said.

An Duong Vuong began offering the outdoor English sessions at the beginning of the 2015-16 academic year, according to schoolmaster Tran Duc Thanh.

The ‘coffee lessons’ are held in turns for all students from tenth to 12th grade, and the school covers all relevant expenses, Thanh said.

“Students can freely order drinks and the bill is on us,” he added.

The students are always accompanied by their teachers, who will set topics for discussion. The school’s English teachers also take part in some meetings to help their students.

Ha Thi Na, the form teacher of an 11th grade class, said this type of English lesson has made students more excited to learn the language.

“Students can practice their speaking and listening skills by directly communicating with foreigners, and many of them have made great improvements in their English scores at school,” she said.