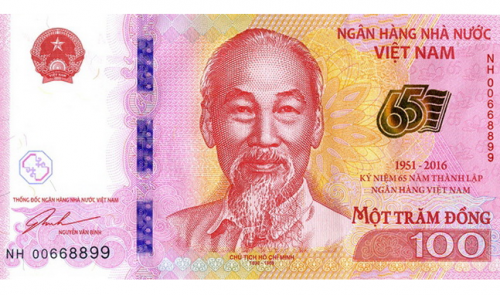 The State Bank of Vietnam (SBV) announced on Monday that it will issue a souvenir 100-dong banknote on May 6 in commemoration of its 65th anniversary (1951-2016).

According to the SBV, which is the central bank, the bill will be a 100 Vietnamese dong denomination, will be printed on 83 millimeter by 163 millimeter high-quality, cotton paper with a primary color of red, and will not be eligible for circulation.

The bill will feature the most iconic features of the country, such as Thanh Giong (Saint Giong), a mythical folk hero, a stylized depiction of the currency used in ancient Vietnam representing the nation’s monetary sovereignty, and the patterns found on Ngoc Lu Bronze Drum, an artifact from the country’s Bronze Age, according to Dao Minh Tu, vice governor of the SBV.

Tu expects the bill to serve as a souvenir while helping to promote features of Vietnam to its citizens and international friends who take interest in the country’s economy and its monetary and banking operations, especially its currency.

Despite having no circulation value, Tu said the bill would be printed using the most state-of-the-art monetary technologies currently available, on a par with those used in the U.S. dollar.

This banknote will also be a trial step toward the introduction of new banknotes in Vietnam in the future, Tu added.

The bill’s security features include an embedded lotus and the number 65,  a watermark, variable ink, and a security ribbon similar to those found in euros, dollars and other currencies

The SBV and other commercial banks in Vietnam will start selling these notes across the country to those who want to buy them as a souvenir or gift.

This is the second time the SBV has printed a souvenir banknote, the first being in 2001 when it celebrated its 50th anniversary with 50-dong bills.