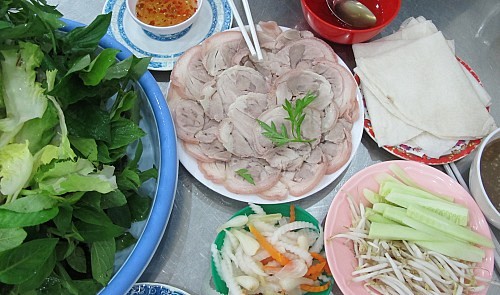 A southern province bordering Ho Chi Minh City is holding a festival to promote one of its delicacies as part of the national cultural heritage today, April 6.

The first-ever Dew-Wetted Rice Paper Festival, or banh trang phoi suong in Vietnamese, is being held in Trang Bang District, Tay Ninh Province, known as the birthplace of the renowned specialty.

Banh trang phoi suong is made by leaving rice papers outside overnight for them to be moistened by dew, which adds a unique flavor to the food. The dew-wetted rice paper is usually served with boiled pork, vegetables, and fish sauce.

Dew-wetted rice paper was recognized as part of Vietnan’s national cultural heritage by the Ministry of Culture, Sports and Tourism in October 2015.

It was also among eight other delicacies recognized by the Asian Record Organization in 2013, and was featured on National Geographic Channel and Public Broadcasting Service (PBS) in August, 2007.

The festival in Trang Bang is intended to introduce dew-wetted rice paper and its’ production practice to visitors during a week-long run.

Some 200 booths at the festival will treat visitors to local dishes and craft making performances. There are also food courts for festival-goers to taste the famous banh trang phoi suong.

The event is showcasing the biggest dew-wetted rice paper ever made, measuring 1.2 meters in diameter, and aiming to set a Vietnamese Guinness record.

Duong Van Phong, director of Tay Ninh’s culture, sports and tourism department, said the festival is being held as part of a series of activities to mark 180 years of the province’s establishment and development.

“This is a great chance for provincial travel agencies, restaurants, and resorts to cooperate with partners in neighboring provinces,” he added.