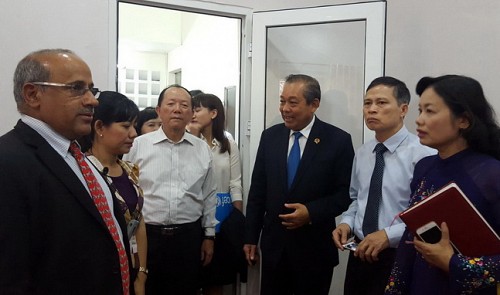 A courthouse specializing in handling cases concerning marriage, family, and juveniles was officially opened on April 4 in Ho Chi Minh City, with officials hoping to reform judicial practices across Vietnam.

Truong Hoa Binh, chief justice of the Supreme People’s Court of Vietnam, handed down the decision to establish the Family and Juveniles’ Court to the People’s Court of Ho Chi Minh City on April 4 at the court’s commencement ceremony.

The court will specialize in processing familial and marital disputes and cases where the offender or the victim is under 18 years of age, and is the first model of a so-called ‘friendly court’ in Vietnam aimed at kick-starting country-wide judicial reform.

Tran Thanh Minh was assigned as chief justice of the court, while Pham Thi Duyen, Do Giang, and Pham Hong Loan were named its deputy chief justices at the ceremony.

The courthouse is located at number 26, Le Thanh Ton Street in District 1, Ho Chi Minh City, the internal design of which is arranged to minimize the stress and tension that could be felt by juvenile litigants.

The courtroom features a square table instead of the usual judges’ bench.

“This layout makes any trial feel like a meeting or discussion among the judges, litigants, prosecutors, and lawyers. It helps lift the burden off the parties and lets the tribunal listen more closely to the arguments and rule the case,” Ung Thi Xuan Huong, chief justice of the People’s Court of Ho Chi Minh City, explained to a representative from The United Nations Children's Emergency Fund (UNICEF) who was visiting the courthouse.

Above the courtroom is a floor reserved for function rooms such as an infirmary and a psychological counseling room, as well as a playroom equipped with toys, comic books, crayons and papers, and cushions for children to play in.

The playroom is reserved for children who accompany their parents to the courthouse, or to those who wait to attend a trial themselves.

The room is monitored by a camera, which can be used by psychologists to observe and analyze a child’s behavior, and is a place where experts can talk to children of divorce cases and understand their wishes.

According to Huong, divorce cases account for 40 percent of all cases filed in Ho Chi Minh City.

Huong added that the court will initially have 12 judges, with this number expected to increase to 18 in the future.

“The selected judges are those who are experienced in court and possess a calm and gentle personality to be able to talk and listen to juvenile litigants about their issues,” Huong said.

Apart from the judges, the court will also have a board of 20 counselors who are experts in a number of fields related to the operation of the court, and whom can be referred to by the judge before ruling a case, according to Huong.

Le Thi Thu Ba, deputy chief of office of the Party’s Central Committee, expressed her satisfaction with the court’s facilities.

Ba noted, however, that not until feedback from actual cases handled by the court are received can its effectiveness in reforming judicial practices and protecting human and children’s rights in Vietnam be thoroughly assessed.

Former deputy chief justice of the Supreme People’s Court of Vietnam Tran Van Do, who supported the establishment of a family and juveniles’ court from its inception, expressed his delight to see the court come to life.

“I think the establishment of a friendly court where children can play and receive psychological consultations without constantly hearing sirens and seeing criminals in handcuffs is a great start,” Do said.

“Having to accompany their parents to court is enough of a trauma for children, let alone having to witness other activities in the courthouse, which can have a significant impact in the child’s psychological development,” he added.

Do stressed that even in cases where a juvenile is the offender, a court with medical and psychological experts at hand will help educate young offenders better and reduce their sense of guilt.

Chief Justice Truong Hoa Binh asserted that the handling of familial disputes in court could have a major impact on the psychological life of each of the family members, and could either positively or negatively affect the development of a child.

In that regard, Binh concluded, a well-handled case could reduce the number of young offenders and create a healthy environment for children to develop their physical state and individual personality, contributing to the overall stability of the community.