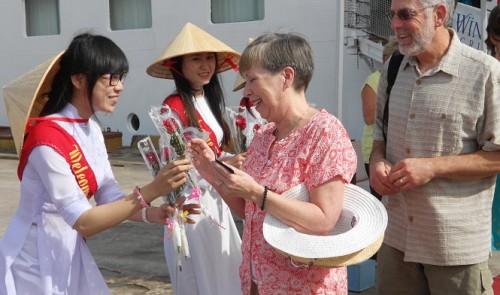 Vietnam to issue one-year visas to US citizens: legislature

Vietnam is poised to extend the validity of single-entry visas for U.S. citizens to one year to facilitate their travel and foster trade and commercial ties between the two countries, the lawmaking National Assembly said Monday.

U.S. tourists or business travelers currently can only apply for a three-month, single-entry visa for their Vietnam trips, and the American business community has repeatedly pushed for the termto be prolonged.

A proposal to extend the visa term to one year was delivered to the National Assembly at Monday’s meeting in Hanoi by Vietnam’s newly elected President Tran Dai Quang and Deputy Prime Minister and Foreign Minister Pham Binh Minh.

Vietnamese citizens who wish to enter the U.S. for business and tourism purposes are now allowed to apply for a multi-entry, 12-month visa, and Vietnam should do the same on the basis of reciprocity, according to the proposal.

The proposition therefore calls on the National Assembly to approve a new diplomatic note on granting visas between Vietnam and the U.S., with the extended duration included.

The new visa term will facilitate the travel of U.S. citizens and boost Vietnam-U.S. trade and commercial ties, according to the proposal.

The proposition was discussed by lawmakers at the meeting.

Deputy Chairwoman of the National Assembly Tong Thi Phong, who chaired the event, eventually concluded that the legislative body “agrees to grant one-year visas” for U.S. citizens to enter Vietnam.

The Standing Committee of the National Assembly will prepare a resolution to officially ratify the diplomatic note as proposed by the president and foreign minister, Phong said.