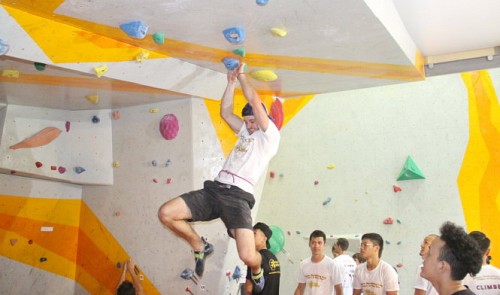 A gym in Ho Chi Minh City now offers climbing training not only for amateurs, but also for porters of the renowned Son Doong Cave in the north-central province of Quang Binh.

The Vertical Academy Climbing Club in District 2 was established in late 2015 by Cedric Deguilhem.

The 40-year-old French instructor, also the club’s owner, is an expert in rope access, a form of positioning, initially developed from techniques used in climbing and caving.

Cedric regularly guides porters through the use of climbing equipment, safety rules and practice.

Porters are the muscular young local men tasked with carrying camping gear, food, and adventurers’ luggage on the long, treacherous journey from outside into Son Doong Cave.

The men are also responsible for preparing meals for groups of tourists during tours to the cave.

The special course for porters lasts three days, while training classes for amateurs open year-round with an entrance price of VND150,000 (US$6.73).

Unlike other gyms where climbers are secured with rope and climb on a vertical wall, here, players grab the climbing holds with no training aids.

The club has three climbing areas with varying levels of difficulty.

Dedicated to amateurs, it allows climbers to secure themselves to a rope and climb vertically while grabbing artificial holds.

The instructor holds the other side of the rope to ensure safety in case the climber releases it and drops down.

Two other areas, called Bouldering 1 and 2, are more difficult as the wall is not only steep but also includes obstacles.

Most of the climbers here are foreigners accustomed to a mountaineering environment from an early age.

Ngo Hien Thuc, one of the instructors, guides climbers through exercises using their hands, feet, abdominal muscles, and fingers, which are considered the most important parts of the body in mountaineering.

Thuc says climbers should choose a shoe slightly smaller than their normal shoe size, which will help them grab the climbing holds easier.

Pierre Fontain, a French climber, said he was born in Annecy, a city in south-eastern France that has lots of mountains.

“It is great that we have this kind of gym in Ho Chi Minh City to maintain the weekly workout. Mountaineering is an activity that strengthens many parts of the body,” he shared.

Fontain is not only a customer but also a ‘volunteer’ here.

He helps the staff re-arrange the climbing holds to create new routes on a weekly basis.

“In Europe, we travel or picnic every weekend, so children get used to climbing,” Cedric said.

The Frenchman explained that the concept of climbing does not only mean using professional equipment and climbing on high mountains.

“Bouldering is much more common as anybody can do it. We consider climbing a life skill in which we learn how to be safe rather than the adventure sport Vietnamese call it,” Cedric concluded.

The club organized a mountaineering tournament called the Bouldering Cup on March 26.

Climbers competed with each others on dozens of different routes, which increased in difficulty as the competition went on.

The event, the first of its kind in Ho Chi Minh City, attracted around 100 climbers.

According to Hien Thuc, the gym welcomes from 20 to 30 customers every day.

The club includes 200 members, 80 of which are Vietnamese.