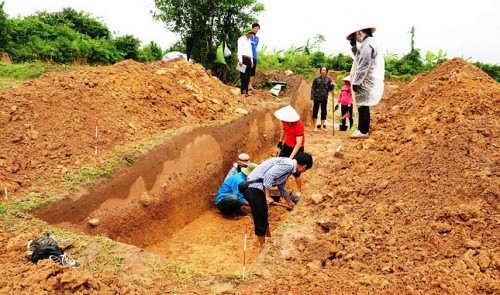 Vestiges of an ancient community that inhabited Vietnam’s Central Highlands over 800,000 years ago have been uncovered, archeologists announced in a press conference in Hanoi on Monday.

According to Dr. Nguyen Giang Hai, director of VIA, the relics were discovered after a field trip to An Khe by the institute in late 2014, following a report from the Central Highlands provinces.

On receiving the report, the VIA sent an invitation, which was accepted immediately, to the Novosibirsk Institute in Russia. They agreed to accompany the Vietnamese team on the archeological trip, sending a group of their foremost Stone Age experts which was led by Dr. Anatony Derevianko, an academic at the Russian Academy of Sciences.

According to the VIA, the group had identified stratigraphic units where vestiges of the Stone Age were found, and had unearthed 58 stone artifacts along with 21 meteorites.

More importantly, the specialists also discovered an area of interconnected hills that formed a kind of basin which they said could have housed sedentary communities of ancient humans.

Scattered along the site are 12 areas that bear cultural traces of primitive humans, which the group has collectively labeled ‘Roc Tung.’

The stone artifacts found in the excavation include arrow-shaped objects, tools used for cutting and scraping, flake tools, and others indicative of being the working tools of primitive humans.

The specialists said the cultural strata remained intact and preserved in perfect condition, adding that they even found hand axes and other tools for daily production and living activities.

These tools, they said, were distributed along the same stratum, proving the existence of primitive humans in An Khe for a very long time.

“The findings were far beyond anything we could have expected. These archeological trails are of international stature, surpassing any discovery recorded so far in Vietnam or Asia,” Dr. Nguyen Giang Hai said.

“Previous findings from the Stone Age period were discovered randomly as singular objects, while the artifacts we found at An Khe were concentrated into a trail that formed a whole cultural stratum. In archeology, this could be viewed as an historic discovery that serves to affirm that An Khe was one of the cradles of humanity, and that communities of ancient humans once roamed this land, a fact that can be proven through clear scientific evidence,” Dr. Hai said.

According to Nguyen Khac Su, a VIA member, these artifacts could date back as far as 700 to 800 thousand years ago, older than any other recorded artifacts worldwide.

The Russian specialists explained that some tools found in the discovery bore features that could even be older than the Baise stone collection in Guangxi, China, which dates back 800 thousand years.

This means, the specialists say, that An Khe could be home to the oldest vestiges of humanity discovered to date, and proof of the dawn of the Vietnamese people.

The VIA has proposed that in recognition of the Early Stone Age relics found in An Khe, a special national site be established.

“The relics in An Khe must be protected at all cost, for they are not only our nation’s heritage, but the heritage of all humankind,” Hai stressed at the press conference on April 11.

Dr. Nguyen Gia Doi, deputy director at VIA, reaffirmed the gravity of the archeological findings in An Khe, saying “These discoveries contribute to the global map of human appearance and evolution, while dismissing the claim of some Western scholars who insist that hand axes were exclusive to human communities in the West, while Eastern humans only used choppers.”

Dr. Doi added that an international conference will be held no later than early 2017 by the Vietnam Academy of Social Sciences to publicly announce the findings, with the participation of leading Early Stone Age scholars throughout the world.