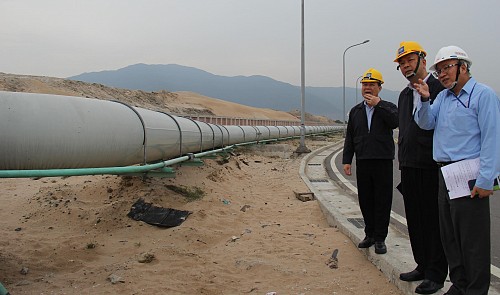 A Taiwanese firm in the north-central Vietnamese province of Ha Tinh has been criticized by the public after stating that authorities must choose between marine life and the steelmaking industry, amid the unexplained mass fish deaths in the region.

Tuoi Tre (Youth) newspaper conducted an interview with representatives from the subsidiary of Taiwanese corporation Formosa in Ha Tinh on Monday, regarding the question that the firm’s wastewater could be responsible for the deaths.

According to the newspaper's reporters, the number of marine animals living near the sea area where the factory’s wastewater pipe is located has shrunk considerably since the firm started operations.

Chou Chun Fan, head of the Hanoi office of the company, stated that it was a matter of course that the wastewater would affect the aquatic environment to a certain degree.

“I cannot assure you that the activities of the steel factory would not impact marine life. You win some, you lose some,” Pham said.

He said operators of the subsidiary had tried their best to establish a factory that met all standards set by the Vietnamese government, and had been permitted to begin operations as per law.

“You have to decide whether to catch fish and shrimp, or to build a modern steel industry,” the representative said.

“Even if you are the prime minister, you cannot choose both,” he continued.

Regarding the question about the frequency of the firm’s pipeline system cleaning, Khau Nhan Kiet, director of the company’s environmental department, claimed that he could not remember exactly how many times the activity has been completed, adding that the most recent one was in March.

“We only applied a light acid for the cleaning. All wastewater was treated according to regulations after the process,” Kiet said.

According to Chou, the factory is equipped with an automatic monitoring system that can detect whether its wastewater exceeds normal limits, accompanied by a team of employees that carry out regular examinations.

He added that the company sent statistics on the environmental impact of its business operation to the provincial Department of Natural Resources and Environment once every three months.

The statistics are provided by a separate company specializing in environmental technology after thorough analysis of collected samples, Chou elaborated.

In a brief interview with Tuoi Tre, Phan Lam Son, deputy director of the Ha Tinh Department of Natural Resources and Environment, confirmed the above information.

Meanwhile, director of the department Vo Ta Dinh said that it could not be said for sure that Formosa was responsible for the fish deaths.

“All business facilities along the coast are potential suspects, including Formosa and the Vung Ang thermal power plant among others. Activities of boats on the sea should also be taken into account,” Dinh said.

Tonnes of farm-raised and wild fish in the central provinces of Ha Tinh, Quang Binh, Quang Tri, and Thua Thien-Hue have been discovered dead with authorities failing to identify the exact cause so far.

Deputy Minister of Natural Resources and Environment Vo Tuan Nhan confirmed on Sunday that the ministry had collected all possible samples, whose test results will be available this week, at which pointthe cause of the incidents will be revealed.