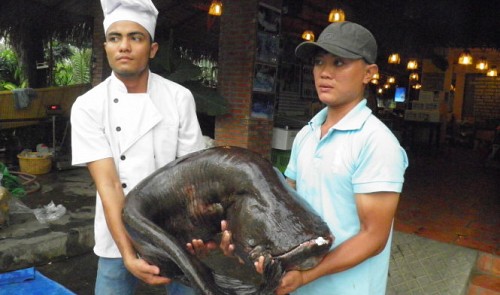 Restaurateurs in Ho Chi Minh City have hunted high and low for rare, gigantic fish, including critically endangered species, as demand for their flesh continues to soar.

Well-off residents in the southern hub have recently developed an exotic taste for the meat of mammoth fish such as Siamese giant carp, or ‘ca ho’ in Vietnamese, ‘ca tra dau’ (a giant catfish breed) and ‘anh vu,’ believed to have made sumptuous gifts to monarchs in times gone by.

Diners have also been ordering the precious flesh well in advance as presents for their employers and business partners, a new way to show off wealth and social status.

On a recent weekend, a group of diners entered a restaurant in District 3 known for its dishes made from the monster-sized fish flesh.

The manager quickly introduced them to a two-kilogram ‘anh vu’ fish, whose meat sold for VND2.2 million (US$97) per kilogram.

One of the diners told his guests that the fish is a royal rarity exclusive to streams and rapids in the northwestern region and the Central Highlands.

The best way to prepare the delicacy, said to bring consumers good luck all year round, is to steam it, which best retains the fish’s freshness and nutritional value.

Meanwhile, diners at a table nearby were relishing a dish from a 100-kilogram ‘ca ho’, whose scientific name is Catlocarpio siamensis.

One day in mid-March, almost ten staffers at a restaurant in District 7 struggled to carry a 230-kilogram example of the critically endangered ‘ca tra dau’ (Pangasianodon gigas) species.

The ‘monster’ was a rare catch from a river in the Mekong Delta province of Dong Thap.

“I beat nearly a dozen traders to finally get my hands on the beast. Its meat sold like hot cakes, with not even the fins left, and each kilogram fetching VND1.5 million [$66],” the restaurant owner divulged.

The restaurant also had a wide variety of gigantic fish on hand for at least VND1 million ($44) per kilogram.

Traders have forecast the price of ‘ca ho,’ which currently sits at more or less VND4.4 million ($194), will continue to rise thanks to surging demand.

To put its new found popularity into perspective, the same fish fetched only VND1-2 million ($44-89) per kilogram last year.

“Business owners, particularly those in the north, have a marked preference for ‘ca ho’ for the purported good luck it will bring them,” the restaurateur explained.

One night, Tuoi Tre (Youth) newspaper reporters joined Nhan, a dealer in enormous-sized fish in District 4, Ho Chi Minh City, while he was dashing to Hong Ngu District in Dong Thap for a 100-kg ‘ca ho.’

When they arrived at a creek leading to the Tien River, one of the region’s major waterways, a group of fishermen were smoking and keeping an eye on a fish affixed in the water nearby.

One of the fishermen revealed that they were all physically drained, escorting the fish there after catching it in Cambodian waters that noon.

The fish, which struggled to set itself free, was then put on a scale.

Nhan paid for the creature without bothering to bargain.

The fish was then promptly lifted onto a waiting freezer truck, which sped off back to Ho Chi Minh City. Aquatic product shop owners generally place orders with anglers or brokers who transport their huge-sized catch to shops.

The metropolis is currently home to dozens of such shops.

Like many shop owners who set up their own networks across the country and even in Laos and Cambodia for prompt notifications of catches, Phuong has erected her own communication station at one locality and instantly sends her staff off to fetch the monstrous fish.

Shop staffers adhere to strict preservation procedures to ensure the monster fish are kept alive right up until they are harvested and end up on a dining table.

The shops supply the fish to restaurateurs, who are always ready to go in the race for the oversized fish.

Those who arrive late at the site of the catch or fail to offer a high enough price risk losing the fish to others, which in turn hurts their business as patrons turn to other eateries able to offer the monstrous fish.

Several famous restaurants in the Mekong Delta have backed away from the lucrative fish business as they fail to compete with those in Ho Chi Minh City.

Apart from enjoying every morsel of the giant fish themselves, many have also gifted them to their bosses, business partners and relatives.

According to a representative of a giant fish trading company located in District 7, Ho Chi Minh City, hundreds of monster fish were packed and transported by air during the Lunar New Year, with meticulous instructions on how to prepare the fish with packets of sauces and spices included.

Wealthy customers in areas as far as Hanoi and the central city of Da Nang usually order dozens of kilograms of giant fish at one time for their parties.

They do not hesitate to spend additional sums on air tickets and accommodation to have chefs prepare the delicacy on the spot.