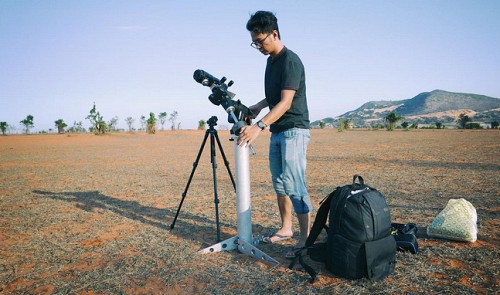 This Vietnamese architecture student’s astrophotography will blow your mind

An architecture student from Gia Lai Province in Vietnam’s Central Highlands with a passion for astronomy spends his free time capturing photos of nebulas and galaxies thousands of light years away to add to his collection.

‘My Astrophotos’ is the title of an astrophotography collection published on the personal Facebook page of Nguyen Tan Khai, a senior at the Ho Chi Minh City University of Architecture.

Khai has been in love with astronomy since seventh grade, after being exposed to telescopes at an early age.

In grade 11, Khai took home third prize at a provincial student science contest for his use of recycled materials to build a telescope that could observe the rings of Saturn, Mars, and vestiges of volcanoes on the Moon’s surface at VND700,000 ($31.4).

In the nine years since discovering his passion, Khai’s love for telescopes and sky observation has evolved into a passion for astrophotography, the art of taking photos of astronomical objects in the night sky.

“Many senior members of my club [Ho Chi Minh City Amateur Astronomy Club (HAAC)] have also been building their own telescopes and taking photos, but the images aren’t always of the highest quality,” Khai said. “I want to continue to develop my astrophotography skills so I have been investing in equipment and gaining experience in the field.”

To feed his passion, Khai works part-time to save money and sometimes seeks out additional financial support from family members. With the money, Khai buys low-cost or used parts of specialized cameras from foreign sellers.

The only part that Khai had to buy new to guarantee high-quality images was his Vixen ED100Sf Refractor, which uses a large aperture to capture celestial objects as far as millions of light years away.

After the parts were shipped from the U.S., Khai, assisted by his fellow HAAC members, assembled the camera himself. He estimates the cost of this ‘bad boy’ camera to be around VND65 million ($2,900).

“I have to travel far from the city center to avoid light pollution,” Khai explained regarding his preparation for a photography expedition. “Calculations of the target object, location, coordination, the Earth’s rotation axis, and seasons must be carried out in advance. I usually set up equipment on rooftops or camp sites with power outlets.”

“With my laptop, I’m able to control the telescope and camera with much higher accuracy and synchronization than by simply adjusting the equipment by hand. It’s a pity though that there is no battery available in Vietnam that is suitable to power the equipment, otherwise I’d be able to be more flexible with my shooting locations,” Khai said.

After picking the location, Khai must take the weather into consideration. Photos of galaxies taken by Khai could take up to a month of observation to capture the subject at exactly the right time and date.

Clouds, vapor, and air moisture readings of the location available on a foreign website allow Khai to pinpoint the best date and time to capture specific objects.

“You can’t just go out and take astrophotos when you have free time. The weather is constantly changing, so it can take weeks for it to be stable enough to take photos. In other words, I have to be ready to shoot the moment the weather is clear,” Khai said.

When asked if he had any advice for youths trying to take up the hobby, Khai answered, “Take your personal health into serious account. Staying up late for a week straight can take a toll on your body. You also need to prepare to be alone for most of the time on your trips, as not many friends are willing to travel by night and stay up late to 'chit-chat' with you for a whole week.”

“I myself only get to go night sky shooting with members of my club once every three or four months,” Khai added.

According to Khai, a night of shoot usually lasts from four to five hours, including the setup time.

For certain deep sky objects, Khai said, the exposure time can last between 30 minutes and two hours depending on the object.

“The naked human eye can see these astronomical objects through telescopes, but they wouldn’t appear as clear and colorful as they do in long-exposure photos,” Khai explained.

“My collection is for photography and entertainment purposes only. I’m not after scientific value in photos,” Khai said of the ‘My Astrophotos’ collection.