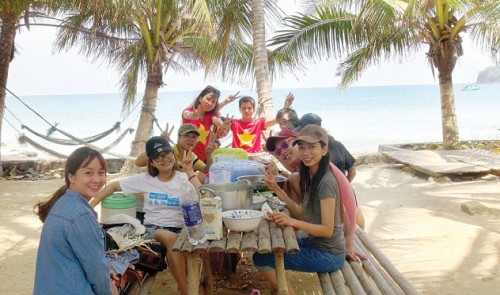 While unfriendly locals and scam artists have put off vacationers in many Vietnamese tourist attractions, the reclaimers of an island near the heavenly holidaymaking retreat of Phu Quoc have achieved the opposite due to their sincere hospitality in recent years.

May Rut Island, approximately 10 kilometers to the southwest of An Thoi Town in Phu Quoc District in the Mekong Delta province of Kien Giang, has emerged as a magnet for visitors on travel forums over recent years.

Its growing appeal is attributed partly to its picturesque, pristine seascape, fringed with white-sandy beaches, though another reason is its heartwarming hosts, who are a far cry from the often dishonest tourism operators blamed for the declining number of visitors in recent times.

Many satisfied tourists have said they would return to the island soon to pamper themselves amidst the gorgeous seascape and reunite with the cheery, amiable owners.

Bay Yen, 88, who reclaimed the island more than 50 years ago, said she does not remember how her magical tourism tale began.

When she and her husband left Chong Islet off Kien Luong District for May Rut, where they erected tents and scavenged for crabs and wild fruits, never in their wildest dreams did they foresee the marooned island becoming the tourist hub it is today.

It began years ago when the kind-hearted woman first welcomed visitors from Phu Quoc and told her eighth daughter, Pham Thi Nu, or Tam, a 58-year-old islander, to prepare a homely meal with homegrown veggies and freshly caught seafood.

The visitors were treated to both the mother’s eventful life story and her daughter’s delicious meal in a cozy environment.

The guests then indulged in fruit-picking in the host’s garden, bathing in the sea and dozing off in hammocks to the beat of nearby waves.

They could leave on their own free will, or spend their night on the exotic island.

As word spread, visitors soon became more frequent by both lone tourists and those in traveling groups.

A number of guests offered to pay their generous hosts small sums out of gratitude, but Yen initially declined.

As tour-goers began flooding in, the elderly woman had no choice but to accept their money to serve those who came later.

“As an islander, I’ve just been welcoming guests, not doing any business,” Yen replied whenever asked by some vacationers how much she charged.

Until now, when tourists arrive on a daily basis, with up to 100 on peak days, Yen, her daughter and grandson, Ban, have never charged anyone.

They have just received whatever their guests have given them in return for their warm embrace.

As her health fades, Yen often lies in a hammock when vacationers are around.

Whenever she feels well enough, the old woman walks around slowly with her bent back, and starts small talks with her visitors.

The family’s homestay offers a clutch of delights for holidaymakers to choose from, ranging from fresh seafood, cooking their own meals and diving for sea urchins nestled among coral reefs.

Ban, Yen’s grandson, is the helpful guide who accompanies tourists during sea dives, and shows them how to prepare their urchin catch into a mouth-watering grilled dish.

The kin-like ties between Yen’s family and their visitors, along with their simple, homely delights have enhanced the island’s appeal.

Tourists often stay for a few days, and spend their nights on their hosts’ beds or in the hammocks on the patio.

Nguyen Huu Nghiem, a 40-year-old tourist from Ho Chi Minh City, told Tuoi Tre in mid April that he had been staying at Yen’s home for almost a month.

He added that he, his wife and children were highly impressed during their homestay with Yen’s family.

After seeing off his wife and children to Phu Quoc before they returned to Ho Chi Minh City, Nghiem stayed on for more rest and to implement his diet to cure his gout.

Apart from tourists from other cities and provinces, residents, particularly youths, from Phu Quoc Island, known for its heavenly beaches, are also drawn to May Rut Island.

The Tuoi Tre reporters recently bumped into Duong Thanh Van, chair of the People’s Committee of Hon Thom Commune in the vicinity, who was pampering himself along with some friends and family on May Rut Island.

“In contrast to the rip-offs, dual pricing for foreigners and other unwelcoming tourism operators, Yen and her family’s non-profit, cordial homestay is a specialty that has lured visitors to return,” Van remarked.

An entrepreneur recently came to see Yen and made a VND7 billion (US$311,111) offer in return for the ownership of the island.

Despite his insistence, Yen turned down the offer.

“We will keep the island so that my six children and their own kids will live on and more tourists will come. If I transferred its ownership, where would we move to?” she explained.

The proposal was made following the deadly Carina Plaza fire, which first started in the parking basement