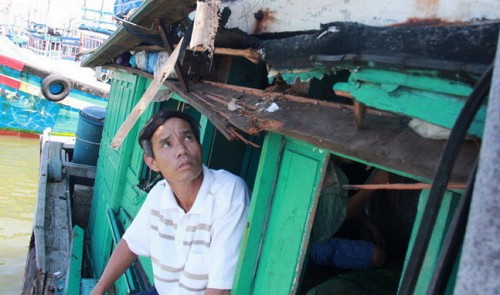 A Vietnamese fishing boat on Saturday returned ashore safely with severe damages to its side, with fishermen claiming it was hit on Thursday by a Chinese vessel off Vietnam’s Hoang Sa (Paracel) islands.

On May 23, the ship QNg-95821 set off to fish near the islands of Phu Lam, Bom Bay, and Lin Con, which are part of Vietnam’s Hoang Sa archipelago, according to 50-year-old captain Nguyen Tuan.

On Thursday, the sailors were having a rest at around 9:00 am when the captain and his chief engineer Truong Van A saw a white vessel number 31102 with the text ‘China’ written on its side approaching their ship, Tuan recalled.

The captain tried to maneuver his ship away from the Chinese vessel, but the hostile ship kept close pursuit.

“After chasing us for a few hours, the Chinese ship suddenly closed the gap and hit us on our boat on the right side,” Tuan recalled.

“They then kept us in sight for fifteen more minutes before heading towards Phu Lam Island.

“We were at coordinates 16o11’N 112 o30’E, around seven nautical miles from Bom Bay Island, at the time of the incident”.

According to Tuan, during the fishing trip, he had been followed and chased by three different Chinese vessels numbers 44044, 37102, and 31102.

Tuan’s ship and its eight-man crew returned safely to Sa Ky Sea Port in the central province of Quang Ngai on Saturday, and the incident has been reported in full to the Border Defense Force of the province’s Tinh Ky Commune as well as provincial police.

“We were having a rest when our ship was hit with such force that the cabin windows were shattered and the right boatside was badly torn,” chief engineer A recalled the horrifying moment.

A added that everybody then rushed in panic to the left boatside for fear that the ship might sink.

“We would have died if the Chinese vessel had pressed the attack.”

Vietnam’s Border Defense officials has talked with each of the crew members and evaluated the damage to the ship shortly after it came to shore.

Phung Dinh Toan, vice president of Quang Ngai Province Fishery Association, said the body had received information on the incident, and would report to the provincial administration and the Central Fishery Association about the happening.

“The fishermen’s fund would also provide financial support for crew members to repair the ship and get back at sea as soon as possible,” Toan said.