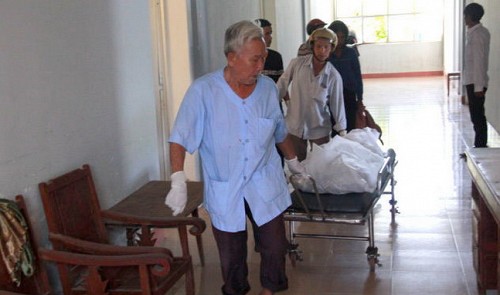 With five decades of handling the dead in hospital mortuaries, a septuagenarian in the central province of Quang Ngai is Vietnam’s oldest man in the job.

Nguyen Len, 78, has been working at the mortuary of Quang Ngai General Hospital for 51 years, observing all the ups and downs of his country, his hospital, and his ‘patients.'

Len was a soldier of the erstwhile Saigon regime prior to the reunification of Vietnam in 1975.

After being one of only a few survivors of an intense battle in Nghia Lam Commune, Tu Nghia District in Quang Ngai Province, Len grew averse to the war.

Shooting himself in the arm in order to get a discharge from his military service, Len then applied for a job as a janitor and mortician at the mortuary of Quang Ngai Hospital.

Len recalled how he and his colleagues at the hospital mortuary had had to bury a handful of dead civilians killed by stray bullets every day during the war.

“Some days there were dozens of them lying side by side from the mortuary to the hallway,” Len said.

He said he had often had to let desperate people looking for their loved ones identify the bodies to see if their family members were among the dead.

“I would uncover the shrouds one by one,” Len said. “Some cried tears of joy, others of pain.”

On the day liberation troops from the Democratic Republic of Vietnam took over Quang Ngai, Len said he and other morticians stayed behind to take care of the dead after all the doctors had fled the hospital.

The one and only

In 1998, Len retired from his job, but was concerned that his replacement would not take as good care of the dead as he had.

He did not have much time to contemplate his worry however, as the hospital contacted him only a few days later, asking him to retake the job, and saying his successor had quit due to… fear.

“I was working in the fields at the time, and there was dirt all over my body. As soon as I heard the news, I packed up and went back to the job without a second thought,” Len recalled.

On his first day back at work, Len cleaned a total of six bodies, of which he buried four and handed the other two back to their family members.

Pointing at the cold chambers in the mortuary, Len said that in the past there had not been such modern body preservation equipment, and dead bodies had simply been placed on a marble surface covered by a cage.

Len said he was not afraid of working with the dead, as “what is there to fear when you’re doing something good?”

“Maybe I’m even blessed by those I buried,” he joked. “That would explain why I haven’t had to take any medicine throughout my career.”

It could also have been the love of his job that had kept Len energized and motivated to work tirelessly after retirement for a monthly wage of VND1,150,000 (US$51).

Len does not seem bothered either by the low salary, or discouragement from his family members.

“I have six children, and they all used to tell me to stop. Now they even come to help me move the bodies,” Len said.

Nguyen Tan Duc, director at the Quang Ngai Department of Health, said his greatest desire was for everybody working in the medical field to have an attitude towards their job like Len’s.

“Len is a role model for a chief like myself to learn from,” Duc said.