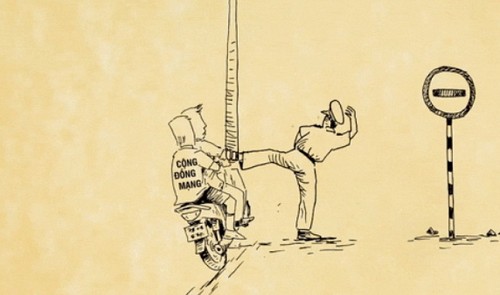 Two people on a motorbike allegedly kicked by a Hanoi traffic cop, as seen in a video that went viral earlier this week, have been fined for breaching traffic rules, as a debate raged over whether traffic offenders should be stopped at all cost.

Nguyen Van Tuan, 20, was required to pay a fine of VND2 million (US$89) and had his motorbike seized for a month for numerous violations, officers of Team 3 under the municipal traffic police unit said Tuesday.

Offenses include traveling the wrong way, not wearing a crash helmet, ignoring police’s order and lacking a driver’s license and vehicle registration paper.

On Monday afternoon, Tuan was speeding in the wrong direction along a busy street in Hanoi, and had a female passenger on the back seat when he was confronted by a Team 3 member.

As the motorbike passed him, the officer raised his leg, with the vehicle ending up crashing into the median strip, as seen in the two-minute video whose authenticity has been confirmed by the city’s traffic police.

The police officer involved, identified as Nguyen Hoang Anh, has been suspended from duty. Anh said late on Monday that he only raised his leg to jump and avoid being hit by the on-rushing motorbike.

While it is not clear if the officer made contact with the offenders or they fell on their own, the footage immediately went viral, and has sparked debate over whether police should stop traffic offenders by any means, even at the expense of their lives.

In a serious case like this, where the driver has flouted a number of road laws, opinions differ on whether there is any safe way for police to handle the matter.

In an online poll conducted by Tuoi Tre (Youth) newspaper, which had attracted 4,150 votes as of Wednesday morning, 68.5 percent supported the way the Hanoi cop resolved the case.

Nearly 16 percent of the votes supported the idea of recording the license plate of the violating vehicle in order to penalize the rider later, while 14.7 percent suggested the on-duty officer notify the nearby forces to stop the offenders, instead of trying to chase after them.

Dao Vinh Thang, head of the Hanoi traffic police unit, said the officer in Monday’s incident should be supported, as the motorbike driver posed a serious threat to safety.

“It is a reflexive action for [the officer] to raise his leg in this case, as he had to avoid the speeding vehicle,” Thang told Tuoi Tre.

Le Tu, leader of Team 3, also said his subordinate did the right thing. “The motorbike driver was risking other people's lives by traveling at high speed in the wrong direction, so he had to be stopped,” Tu added.

Tu said Nguyen Hoang Anh had to exert effort to stop the motorbike as it had been linked to a group of drug traffickers, captured by Team 3 20 minutes earlier.

However, Nguyen Quoc Diep, deputy head of the traffic police department under the Ministry of Public Security, said Anh should have chosen a safer approach to handle the issue.

“It is for the safety of the officer, the offenders and other people on the street at that time,” Diep told Tuoi Tre.

“Of course the motorbike had to be stopped as it was causing harm to other people, but kicking them down was inadvisable, as it was an ugly act.”

Lawyer Vu Quang Duc echoed Diep's take, saying the officer should have taken another approach, such as noting down the license number of the motorbike or notifying his colleagues at nearby checkpoints.

“Kicking the offenders threatened their lives,” he added.

However, the lawyer also said the offenders in the video should be condemned for ignoring the safety of police officers and other road users.

The opening of new shopping center in District 1, Ho Chi Minh City in 2015 will turn the area into a bustling shopping district like what people see in Bangkok and Singapore, according to Vietnam’s Retail Market Update report recently released by realty consultancy firm CBRE Vietnam.