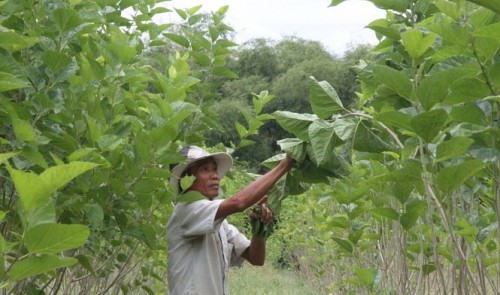 Duy Trinh, a four-hundred-year-old silk-producing village in the central province of Quang Nam that was once in need of a revival, is taking a surprising turn.

One day Tuoi Tre (Youth) newspaper correspondents arrived at the house of Nguyen Huy, 51, member of a quintessential Duy Trinh family that has devoted three generations to silk-making.

Pointing at the stack of flat baskets in the corner of his kitchen, Huy recalled the decline of silk-making in Duy Trinh:

“At its peak, our family was growing two hectares of mulberry and selling silk all the way down to the Mekong Delta. Seven or eight years ago, Duy Trinh silk slowly disintegrated. The village no longer brims with the sounds of working looms as it used to. Baskets were stowed away, still dirty and filled with cobwebs. You no longer see village girls gathering mulberry in the fields or weaving by their spinning looms.”

Within the last two years, however, the mulberry, once abandoned, has been greening with life.

Duy Trinh girls are gathering mulberry in the fields again, but they are not weaving by the spinning looms.

The silkworms that eat the mulberry leaves are no longer grown to produce silk, but are now being reared to be sent to cafés and bars as pub grub.

Huy said that after receiving an exemption of land tax and a mulberry subsidy from local authorities, he and nine other families have returned to growing silkworms.

The species of silkworm being grown in Duy Trinh, obtained from the north, is often sold as food. In order to feed the silkworms, Huy’s family revived their mulberry field.

“The pleasant part of growing silkworms as a commercial product is the quick harvest time. I no longer have to stay up late to extract the silk threads and weave them,” Huy revealed.

“But it is sad that a traditional craft passed down from my ancestors can no longer be maintained.”

The sound of weaving looms, once the pulse that sustained the life of the village, is noticeably absent.

“When the village was still in its heyday, there were two hundred families growing silkworms for silk. We wouldn’t sell the larvae until they ran out of silk. It’s different from what we’re doing now,” Truong Van Dung, another Duy Trinh resident, recounted nostalgically, sipping a cup of tea.

“My family has been producing silk for three or four generations, but we could not compete with Chinese silk, so we had to abandon our mulberry fields and our looms to grow corn. It took me ten years to return, but it’s not exactly what it used to be,” Dung lamented.

Nguyen Van Chien, chairman of the People’s Committee of Duy Trinh Commune, revealed that from 2004 to 2014, silk-making was mostly abandoned.

Older citizens had renounced their craft and the young left the village in search of a better life. Confronted with the situation, Duy Trinh has been launching an initiative to revive the traditional craft.

Since 2015, more than a dozen families have participated in the initiative, with a total area of mulberry-growing land reaching 10 hectares.

Upon joining the initiative, each family received a three-year land tax exemption and a mulberry subsidy of VND500 (2.2 U.S. cents) per square meter.

In its first phase, participants have been growing silkworms as a commercial product to gain profit as a stepping stone to return to traditional silk-making.

Chien said growing silkworms as a commercial product yields better profit in a shorter harvest time compared to growing them for silk-making.

However, Chien admitted that finding an output for the product is primarily done by the villagers, adding that there must be better promotion in the future.

“After the villagers have acquired some stability, the next phase will be to reactivate traditional silk-making,” Chien envisioned his plan.

“We need to encourage local families to commit themselves to a fifty-fifty ratio between selling silkworms as a commercial product and growing them for silk production. We cannot disrespect our ancestors by allowing their craft to be buried,” Tuan, an owner of a local silk manufacturing business, asserted.

The journal is published every three months starting Q4 2017