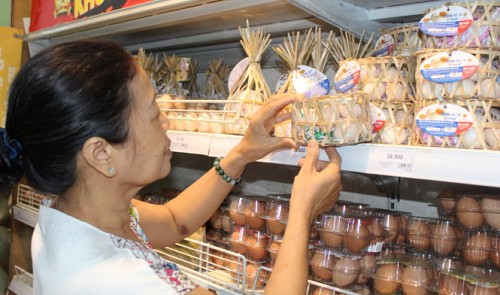 Consumers are confused about what constitutes a “Vietnamese chicken egg,” sold in many markets and supermarkets.

Vietnamese chicken eggs are traditionally known as eggs produced by home-raised hens in the countryside, compared to those raised in large industrial farms.

It appears that not all eggs labeled Vietnamese are actually produced in that way.

Nguyen Thi Tuyet, a resident of Go Vap District in Ho Chi Minh City, said that she did not want to buy eggs from markets because of quality concerns, so she chose to buy them at supermarkets instead.

However, even this does not really quell her concerns, as “Vietnamese chicken eggs” are still sold in large quantities and at a cheap prices in supermarkets.

According to Tuyet, most consumers think of Vietnamese chicken eggs as eggs having come from home-raised, or free-range chickens in rural areas, not industrially-raised chickens.

Because free-range chickens are raised naturally, their eggs have a bigger yolk and better flavor than eggs from industrially-raised chickens.

Some businesses have claimed that if the eggs are collected from chickens raised inside the country, then they should be called “Vietnamese chicken eggs”, to distinguish from imported eggs.

Others claim that as long as the chickens belong to a Vietnamese breed, then their eggs can be called “Vietnamese chicken eggs,” no matter whether they are home or industrially-raised.

Truong Chi Thien, director of Vinh Thanh Dat Company, an egg supplier based in Ho Chi Minh City, claimed that one should not think of “Vietnamese chicken eggs” in the old sense, but should use the word in order to distinguish between eggs from domestic breeds and eggs from foreign breeds.

Specifically, Vietnamese chickens are long-standing domestic breeds in Vietnam, while foreign chickens include industrial chickens and Egyptian chickens because they are imported into Vietnam.

Therefore, according to Thien, “Vietnamese chicken eggs” sold in supermarkets in the South are appropriately labeled as they come from chickens of Vietnamese breeds.

Meanwhile, “Vietnamese chicken eggs” sold at supermarkets in the North are incorrectly labeled because they actually come from Egyptian chickens.

The debate is sure to continue.