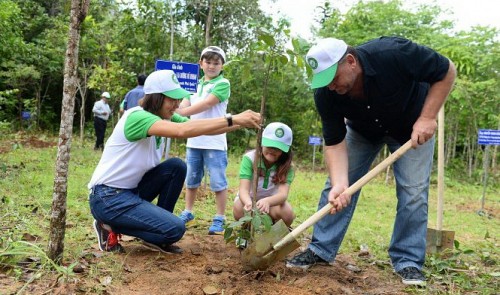 Local authorities, tourism insiders, and residents, including expats, have high hopes that an ongoing campaign which kicked off earlier this month will be crucial to the promotion of sustainable, eco-friendly tourism on the heavenly island of Phu Quoc.

The 'Phu Quoc Green Tourism' campaign, jointly held by Tuoi Tre(Youth) newspaper and the administration of Kien Giang Province in the Mekong Delta, started on August 6 and runs until the end of this year.

The ‘pearl island,’ as it is dubbed, has become renowned as a paradise holiday retreat over recent years.

The green campaign, which is part of the 2016 Phu Quoc-Mekong Delta National Tourism Year, themed ‘Kham Pha Dat Phuong Nam’ (Exploring the Southern Land), is intended to support the master plan of turning Phu Quoc into “an international-level hub of ecotourism,” according to local authorities.

The campaign boasts a clutch of green activities including plant growing, parades on bicycles and a sand painting competition.

Huynh Vinh Ai, Deputy Minister of Culture, Sports and Tourism, joined local leaders in the tree planting ritual, which took place at the Phu Quoc National Park on the opening day of the campaign.

The event was part of a plan to pilot an ecological tour intended to “add trees to depleted forests.”

Tran Chi Dung, director of the provincial Department of Tourism, said the plan is highly promising.

After the model is launched, holidaymakers will be offered excursions around several areas within the Phu Quoc park.

For a reasonable fee, they will each grow one or two trees themselves and mark their experience by writing their names and attaching them to the saplings, Dung added.

The tourists are welcome to return to the site after a time to marvel at the growth of their trees, which will be tended to by those in charge.

More than 200 students, staff and soldiers cycled in a parade through the main streets in Duong Dong Town on Phu Quoc on August 6.

The youths, in white and green shirts, spread the message of environmental protection to a large number of concerned locals.

More activities, including ecological tours, seminars, training workshops and competitions with specific themes are also scheduled to take place as part of the campaign going forward.

Speaking at the launch of the 'Phu Quoc Green Tourism' campaign, Deputy Minister Ai noted that its green message coincides with that to be addressed at a seminar within the framework of the 2017 Asia-Pacific Economic Cooperation (APEC) forum.

The seminar, to be partaken in by tourism ministers from 21 nations, will further discuss environmental protection as a top priority and the crucial role of green tourism in the countries’ sustainable tourism development.

The APEC is a regional economic forum established in 1989, comprising 21 member states, including Vietnam.

This year’s APEC will take place in Peru’s capital city of Lima in November, while the 2017 meeting is scheduled to be convened in Da Nang in central Vietnam.

He stressed that the Ho Chi Minh City-based newspaper and other media agencies will work alongside local authorities and residents to contribute to the island’s sustainable ecotourism growth.

“The campaign is also meant to promote the vibrant image of Phu Quoc in its prime,” Huynh Quang Hung, deputy chair of the Phu Quoc People’s Committee, told Tuoi Tre.

Vietnam’s biggest island is working on an overhaul of tourism infrastructure during the 2015-20 period, he added.

The facelift taking place on Phu Quoc is evidenced by the development in traffic infrastructure from north to south on the island, Hung elaborated.

Phu Quoc is now home to an international airport and seaport, is connected with the national grid, and is looking to build an international passenger port capable of receiving five-star cruisers in the time to come, he added.

Hung, however, admitted that development on the island over recent years has also brought about issues, including rampant littering, a rising number of traffic accidents and insecurity in some places.

Construction is expected to begin on a garbage processing plant with a 200 metric ton handling capacity per day in Ham Ninh Commune by the end of this year, he added.

Beaches and rivers across Phu Quoc have also been brimming with refuge, taking a serious toll on locals and travel firms in recent times.

Dang Van Thang, one resident, lamented that Dinh Cau Beach is generally topped with garbage that has blemished the island and upset locals and travelers alike.

Thang added he had even filmed the unsightly litter piled up along the beach and posted the clips on his Facebook page out of frustration.

“The point is how to raise locals’ and tourists’ awareness of keeping the island immaculate in the long run,” Thang stressed.

Rohan Barker, an Australian national who got married and has settled in Phu Quoc for the past 20 years, took his entire family to the tree growing ritual on August 6.

He called for the prompt establishment of the garbage processing plant and proper environmental education for young children to steer them away from littering and other environmentally destructive habits.