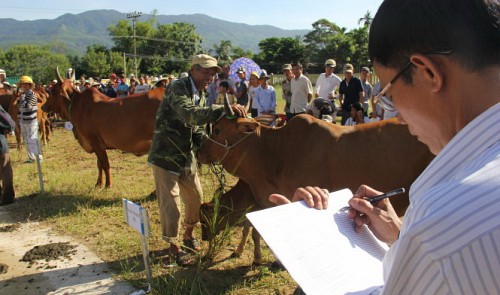 The contest, the first ever held by the province, took place in Dai Hong Commune in Dai Loc District on Friday.

The 10 contestants were outstanding representatives of the locality’s cattle herd, which are descended from or are half-breds of such premium breeds as Sind, bao, and Brahman.

Each competitor is thus the source of pride for cattle farmers in her hamlet.

Nguyen Lanh, a farmer from Hoa Huu Dong Hamlet, said he and his beloved cow, To, had traveled nearly 10 kilometers in the early morning to reach the pageant venue.

Petting the 200-kg animal, he proudly added that To represented some 100 of her peers in the hamlet, and was considered one of the brightest contenders at the pageant thanks to her ideal height and superb fertility.

The condition of being fertile in terms of offspring was judged based on the criterion of the mammals having “ears shaped as jackfruit leaves and round, large buttocks.”

As To was grazing, Lanh stole a glance at her arch-rival, a 250-kg cow kept by a local named Le Dung from Phuoc Lam Hamlet.

Dung’s cow, pregnant with a calf, is easily mistaken for a male bovine, thanks to her blood-like auburn hair, imposing physique, long tail and long horns.

Dung said that cattle raising is his family’s main source of income, allowing him to support his children’s education.

According to Nguyen Hai Chan, a cow trader who sat on the pageant’s 13-member jury, cows kept in Dai Hong Commune are among the best-quality grazing quadrupeds in Quang Nam Province, for they are all fed only with grass.

The 10 contestants gave the jury headaches because they were all “the selected individuals of the best,” he noted.

“Each breed has its own strengths. Half-bred bao cows are heavily-built with a short neck and muscles in addition to their high fertility rate,” Chan further explained.

Meanwhile, Brahman cows, which are typically traders’ favorites, stand out for their sturdy legs and auburn hair.

“I guess the first prize will go to the cows with robust reproductive features including large, round pelvis; numerous creases in reproductive organs; and five nipples,” Chan added.

Nguyen Ba Hien, chair of the Dai Hong Commune Farmers Association, said with a total of more than 1,600 cows and oxen and 800 buffaloes, each household in the commune owns 1.2 bovines on average.

“This is the principal economic medium for the locality to strive for a per capita income of VND40 million [US$1,750] by 2020,” Hien said.

The show aimed to honor cattle farmers and provide them with additional knowledge and experience in cow breeding and caretaking to boost the locality’s production.

It was local cattle herders that came up with the idea of organizing such a cow pageant.

However, experts and local authorities were hesitant as such a competition was unprecedented and they had not worked out sound judging criteria.

Contestants were shown around the stadium by their owner for judges to select individuals with the best-looking physique and elegant gait.

As the show host was introducing her weight, height, growth and reproductive process, Dung’s cow defecated right on the ground amidst farmers’ and spectators’ giggles.

She later relieved herself the second time and left behind another mess of excrement during her coronation moment.