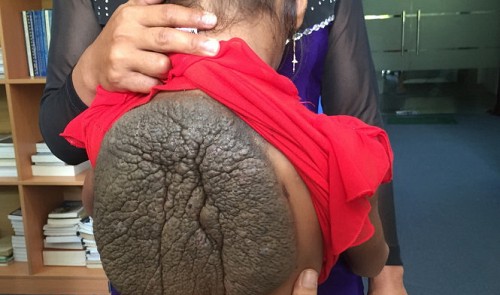 Vietnamese girl has 1kg turtle-shell-like mole removed from back

A Vietnamese girl has recovered from a surgery to remove a mole resembling a turtle shell from her back after living with it for a decade.

Thach Thi Da Ni, Tham’s mother, said that she had seen the nevus as big as an orange on her daughter’s back since giving birth to her.

Ni did not have Tham’s health checked due to financial problems. Seeing the birthmark grow day by day, she took her daughter to the hospital for diagnosis.

The turtle-shell-shaped nevus, whose diameter was 22 centimeters, could become malignant if untreated, according to Dr. Hieu.

“The patient also carried 20 satellite moles surrounding the giant nevus,” he said, adding that the small nevi were removed via electrocautery.

After the surgery, doctors carried out a complex series of skin grafts from her thighs to transplant the skin onto her back.

The mass was then examined to identify whether it is malignant and the results would be available in three days.

If the tumor is benign, she will have a normal life like others, doctors said.

Tham will stay at the hospital for two weeks since the date of operation before being discharged, according to doctors.

As Tham’s family is short of money, the hospital is slated to incur the fee of the surgery.

According to Dr. Hieu, this shell-like mole is the first case in Vietnam and the second in the world.