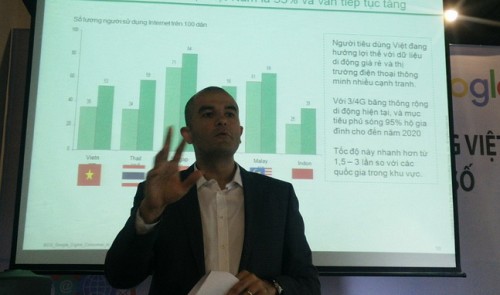 Results of a survey conducted by Google and Boston Consulting Group showed that Vietnamese customers’ optimism was ideal for business owners seeking markets for their ventures.

A study on the role of the Internet on purchasing powers of Internet-connected Vietnamese households was jointly conducted by Google Asia Pacific and Boston Consulting Group.

The study concluded that Vietnam would be the model of development for the next 20 years thanks to its recession-defying GDP growth rate estimated at 6.7 percent, higher than its neighbors Thailand, the Philippines, and Malaysia.

One of the factors contributing to Vietnam’s remarkable economic development pointed out by the study was mobile connectivity.

According to estimations in the study, up to 72 percent of Vietnamese nationals from 18 years of age currently own a smartphone, a 17 percentage-point increase from 2015 figures.

Households with Internet connection make up the majority of households in the country, the study showed. The owners of these households are primarily younger and enjoy a more accomplished social status than their Internet-free neighbors.

These people are more likely to have a greater influence on society and would be the first to try out new services and products, the survey report said.

Internet-connected families are estimated to be 1.5 times more valuable in terms of marketing value compared to Internet-free families.

Internet connectivity is no longer restricted to urban areas, the report pointed out, as nearly half of rural households in Vietnam have enjoyed Internet access, while the rate of new Internet connection in rural areas is also two to three times higher than that in urban areas.

The survey’s report suggested this finding as an explanation for the trend of increasingly relaxed spending among Vietnamese customers, with Internet-connected households making up 83 percent of commodity value for daily products such as powdered milk, diapers, body wash, and sour milk.

Economic reports by Singapore-based investment company Temasek and Google also pointed out that Vietnam’s e-commerce market value was growing and showing signs of a possible breakthrough, jumping from US$0.4 billion to $7.5 billion in 2025.

Vietnam is the second-most populous country in Southeast Asia with the growth rate in the number of people in middle and upper classes far surpassing that of its regional neighbors.

The middle and upper consumer groups in Vietnam are expected to rise by 1.7 times by 2020 in terms of numbers, which would spread across different key localities and initiate a revolution in the digital era, the report concluded.