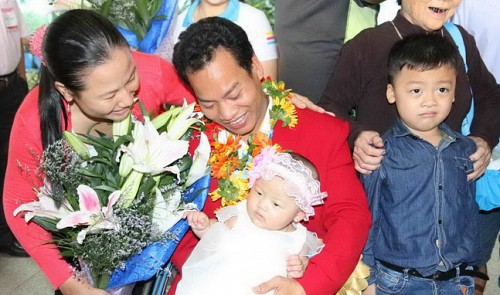 Vietnam’s paralympians to Rio have touched back down in Ho Chi Minh City early on Wednesday to a warm welcome by fans and friends after completing the country’s most successful Paralympic Games ever.

Vietnam’s team to the 2016 Rio Paralympics, which concluded on Sunday in Brazil, finished with one gold, one silver, two bronzes, and a world record, the country’s best result so far at a Paralympic event.

Since early Wednesday morning, Tan Son Nhat International Airport has been filled with hundreds of fans and family members waiting for the team’s arrival with banners, flags, and flowers.

Local media and country officials, including the Minister of Culture, Sports and Tourism Nguyen Ngoc Thien, were among the welcome team to congratulate the team’s historic success.

The family of weightlifter Le Van Cong, who snatched gold and broke the world record in the men’s 49kg powerlifting event in Rio, waited at the airport from 6 am though the team’s flight was scheduled to arrive at 8:30 am.

“He’s our oldest son and I barely got any sleep last night since we were both eager for the morning to go pick Cong up at the airport,” the weightlifter’s wife Chu Thi Tam said with joy as she cradled their youngest child in her arms.

“Many of our neighbors have rented a van to travel all the way from Long An Province to welcome him,” Tam said.

Upon arrival, the team was drowned in a wave of hugs and cheers from fans as tears of happiness rolled down the faces of those present.

“I’m deeply touched by such a hearty welcome from fans and family members. I missed my family a lot. This is the first time we have received such a welcome, and it will surely be the motivation for our continued efforts in the future,” Cong said.

Cong and the other athletes were also presented with presents and reward money from sponsors at the airport.

The weightlifter’s total reward money for his achievement in Rio is estimated at over VND700 million (US$31,250).

The Vietnam team’s success is hoped to boost investment and sponsorship for sports for the disabled.