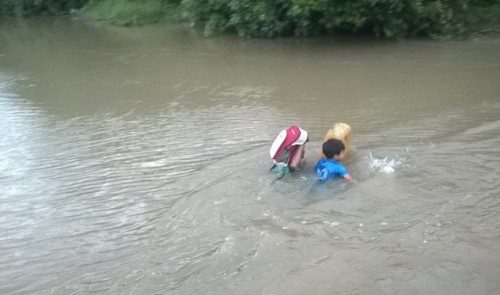 Many children have had to swim across a river, trying to keep their schoolbags dry while going to school in the south-central province of Phu Yen.

Fourteen students of Dinh Nup Ethnic Middle School in Phu Giang Village, Phu Mo Commune, Dong Xuan District, have to swim twice a day across the Ba Dai River to go to school and return home, Dang Ngoc Thanh, a teacher at the school, said, showing the photos he took after school on Tuesday.

The students have to cross the 15-meter-wide river with their schoolbags and uniforms in plastic bags to reach the other side every day.

Some have their parents or siblings carry them on their back to cross the deep waterway while others cling to empty plastic cans to swim to school.

“I feel worried and pity for the students,” Thanh said, adding that a concrete bridge spanning the river is under construction and is expected to finish next year.

Bui Van Huong, principal of the school, said that local authorities have always sent boats to carry students to school during the flood season, “but no boats have been mobilized this year while the flood season has come,” he said.

La O Hoa, chairman of the Phu Mo People’s Committee, told Tuoi Tre (Youth) newspaper that the boats used to carry students across the river are now in bad conditions.

“We have ordered two new boats to help the students go to school,” Hoa said, adding that the boats are expected to be available next week.

Dang Ngoc Anh, chairman of the Dong Xuan People’s Committee, said Friday that the bureau of education and training has been directed to let children stay off school temporarily if the water level is too high for them to safely cross the river.

Anh also said that the district would also figure out why Phu Mo Commune had not reported the bad state of the boats early, which led to the students swimming over the river to school.

“This is the negligence showing a lack of responsibility of the Phu Mo People’s Committee,” he added.

Being asked about the bridge, Anh said that its construction is slated to complete in the middle of next year.