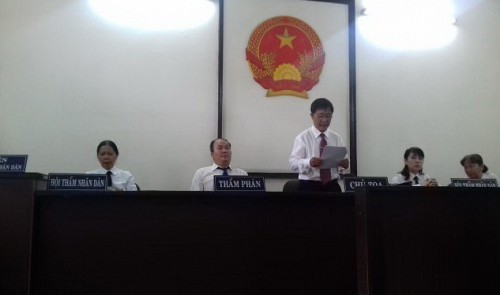 Young Vietnamese victims of sexual abuse are being forced to stand in court, driving them to relive their nightmare under the public eye of the court.

Though Vietnam often keeps the dozens of child molestation and assault cases it hears each year out the public spotlight in order to shield minors from further victimization and unwanted attention, some victims are still being requested to show up in court, forcing them to experience their ordeal again.

A Tuoi Tre (Youth) newspaper reporter on the sidelines of such court hearings is hoping that sharing their stories might shed light on the horrible situations these children have been put through.

During one of these trials, the reporter met two young girls, identified as victims in a high-profile child rape.

With wary, naïve looks in their eyes, the two children, aged six and seven, sat outside the secretary’s room, waiting for a woman who soon opened the door and whisked them into the room with outstretched arms, as if shielding them from further danger.

The little girls remained hidden from sight for the rest of the trial, while Hoang Van Tin, now 38, was sentenced to 15 years in prison by the Ho Chi Minh City People’s Court in 2012 for raping them in April 2011.

The original verdict was annulled by the municipal Supreme People’s Court in July 2012 due to numerous controversial details in the case. The investigation was ordered to start afresh.

In May 2016, Tin was handed a five-year sentence, equal to his time spent in temporary detention, for child molestation at another hearing by the Ho Chi Minh City People’s Court.

With over 13 court hearings in the saga, the trial attracted profuse media attention, with some newspapers going so far as to print the minors’ address and full names or initials.

The unwanted public attention brought by the case turned the victims’ and their families’ world upside down, exposing the children to gossip and risks of long-term psychological scars.The child engaged in an ‘adult act’

One year ago, the Tuoi Tre reporter met a young teenager outside the court, waiting for the judge to summon her inside.

The 12-year-old girl, still in her school uniform, was the victim in a case of a sexual abuse in which a close friend of her half-brother repeatedly tempted her into sexual intercourse when her father and brother were not home.

The young girl recounted that the boy had taken her out and bought her small gifts before asking her to let him sleep with her.

Though she was afraid at first, she later consented.

When her father returned home from work one night, he was shocked to see an unfamiliar pair of male slippers outside his daughter’s room and it did not take long before he was dragging the hiding boy out from the wardrobe while the boy confessed to repeated sexual encounters with the daughter.

Fortunately for the victim, the jury did not request her to stand in court and give testimony.

After the defendant was handed a harsh penalty for his offense, the father quickly ran to comfort his daughter.

Years earlier, the young girl’s mother had left her family, depriving the girl of maternal love and a female confidant to discuss sensitive gender issues.

Though the victim may not currently be aware of the sexual abuse inflicted on her and the potential lifelong impacts, there is a reason why her ‘boyfriend’ has been put behind bars.