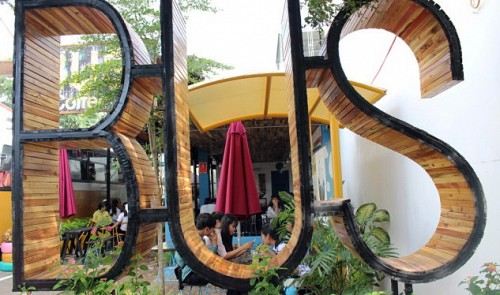 Coffee shop with a bus twist in Vietnam’s Central Highlands

A Vietnamese woman from the Central Highlands province of Dak Lak has designed a coffee shop utilizing an old bus, providing a unique experience to customers.

The highlight of the venue is a yellow bus at its center. The vehicle’s interior has been refurbished with wooden seats and tables, giving it a retro feel.

The person behind the creation is Phan Nguyen Hoai Thu, 32, the owner of the coffee shop.

Thu said that she searched many places for a bus that fit her needs and eventually found one at a scrap trading center in the neighboring province of Dak Nong.

“The important thing was that the bus’ frame had to be in good condition for long-term safety, and that the bus was long enough to install seats and tables,” she explained.

The bus has two air-conditioners, one at each end, while its original steering wheel and driver’s seat have remained.

The original entrance and exit doors have also been retained, allowing waiters and “passengers” to board and disembark from the bus.

“As the main concept centers on the bus, a lot of the fixtures and furniture in the venue are made from parts of the vehicle,” the coffee shop owner said.

Tables and planting pots have been made from used tires.

The unique coffee venue has been welcomed by scores of young customers and received positive feedback because of its comfort and friendly atmosphere.

“Customers can easily find a seat that suits their preference thanks to the iconic design of the bus, allowing them to enjoy a window view,” Nguyen Phan Hoai Thuong, a student of Tay Nguyen University, told Tuoi Tre (Youth) newspaper.

“Today social networking is still on the rise, which means there is a great thirst for sharing visual information among people, especially the young,” Thu said, explaining why she came up with the design.

“Thus, something familiar but unique and endearing fits what customers need, checking in on social networks or saving their moment with photos of their families and friends.”