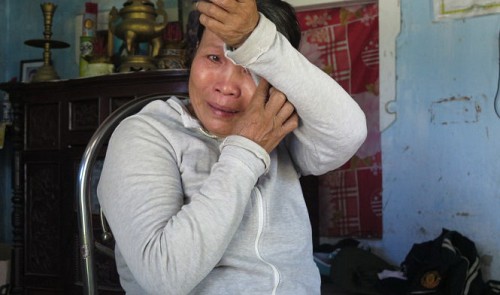 Two siblings in central Vietnam have been separated twice; once by the massacre of Vietnamese civilians by South Korean mercenaries during the American war in Vietnam half a century ago, and then by death.

Nguyen Thi Bon, now 54, resides in Dien Duong Commune, Dien Ban District in the central province of Quang Nam, shared a tearful story about the ordeal that she and her younger sister went through.

The location is close to where massacres were carried out by South Korean troops in 1968, including the central provinces of Phu Yen, Binh Dinh, Quang Ngai.

Bon’s mother and two elder siblings were killed while she and her younger sister, Bong, survived with severe injuries.

Bong was taken to a German military medical vessel, then anchored in the neighboring city of Da Nang, for treatment.

The duo did not see each other again for 23 years.

They were reunited some years ago before being split up for good.

On the altar at Bon’s home in Dien Ban District sits a photo of her sister, Bong, while some more color photos of her with her American husband hang on the wall nearby.

Bon revealed that she and her sister are among the nine victims who survived the South Korean mass killings in Ha My Hamlet, which claimed 135 innocent lives 48 years ago.

She recalled a quiet morning when she, her family members and neighbors were getting ready for a new working day in the paddy field. A group of South Korean soldiers then appeared out of nowhere, lining up the unsuspecting locals in the field before shooting straight at them.

Bon herself was riddled with wounds.

Hardly had Bong cried out for their dead mother before the terrified little girl was engulfed in a volley of bullets that smashed her entire lower jaw.

After the South Korean troops left, a group of American soldiers patrolled by and spotted the survivors.

They took Bong to Da Nang, where the German military medical ship was docked, after seeking consent from her father to send her to Germany for surgery.

“My dad and I saw Bong on the ship but her mouth was in a bandage, so she couldn’t speak. We didn’t see her again until more than 20 years later,” Bon said in tears. Bon’s family lost touch with her sister in 1972.

After 1975, under the impression that Bong would return to Vietnam following the surgery in Germany, Bon and their father traveled from one place to another in search of her.

Their father died some time later. Faced with adversity, Bon struggled to support herself by working as a hired hand and domestic helper.

After Bong had boarded the German ship, she was adopted by a married German couple before settling down in the U.S. some time later.

All she had with her then was some photos of her father and her own photo taken as a small child.

Bong underwent around a dozen grueling facial reconstruction surgeries, which left her infertile.

She did marry though, and lived in Oakland, California.

Bong took every opportunity to send her profile back home in the hope of being reunited with her own flesh and blood.

Nguyen Coi, a 72-year-old veteran and witness to the massacre in Ha My Hamlet, instantly recognized Bong when he learned of her story from another Vietnamese American.

He promptly informed Bong, who rushed to speed up the process of finding her beloved sister.

In 1995, Bong returned to Da Nang for a tearful reunion with her elder sister and other relatives.

“We cried a lot but could not say much due to the language barrier as she spoke only English,” Bong recalled.

Bong stayed with her elder sister and her family for 10 days before going back to the U.S.

The sisters kept in touch over the following years. Bong sometimes sent her sister gifts and emails in English, which were translated into Vietnamese by an English teacher named Pham Phu Dung, who resides in Hoi An City.

Bong wrote in one of the emails that she would try to learn Vietnamese so that she could talk more with her sister and relatives during her next visit.

In late 2013, Dung received an email from Bong’s foster mother in the U.S., breaking the devastating news of her death.

“I lost her twice,” Bon said in tears, adding that a Korean man, who had cried over their sad story, promised to travel to California and look into the cause of Bong’s death.

She had not received a reply from him over the past two years, however.

According to her obituary posted on oakland.chapelofthechimes.com, Bong MacDoran, a respected entrepreneur, devoted naturalist and passionate lover of life, died in December, 2013 at the age of 47.

Bong graduated from the University of California, Berkeley with a degree in biology in 1987.

She enjoyed successful careers in banking, rising to the level of Vice-President at the Bank of America, in her own financial consulting firm, and in the eco-tour company co-founded by herself and her husband, Alvin.

Bong is fondly remembered for the twinkle in her eyes, her repeated triumphs over adversity, inspiring optimism, and devoted, loving care for those she loved.

She is outlived by her husband and her adopted brother Michael, as well as an elder sister and two half brothers in Vietnam, the obituary said.