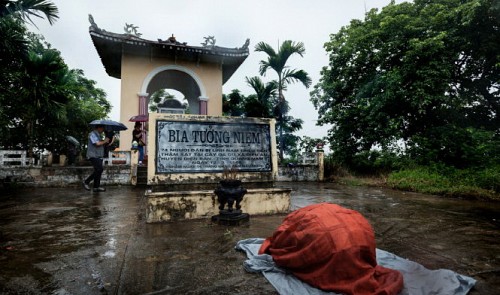 Interest in and repentance for the massacres carried out by South Korean mercenaries during the American war in Vietnam half a century ago is surging in Korea.

Seoul-based newspaper The Hankyoreh 21 (The Korean Nation)’s revelations surrounding the massacre of Vietnamese civilians by South Korean troops in the late 1960s has come as a huge shock to the East Asian country.

Author of the articles in question, Ku Su Jeong, said she had received an influx of letters from the newspaper’s readers.

“In these long letters, many said they had been crying a lot while others simply expressed their horror,” Ku said.

“They asked me what they could do to apologize to the Vietnamese people.”

Ku said she had also received emails and feedback from Japanese, American and Australian readers.

Over the course of history, South Koreans themselves have undergone multiple invasions by foreign intruders.

The latest is the Japanese empire occupying the Korean peninsula between 1910 and 1945, one of Korea’s most regrettable chapters.

Koreans also went through deadly armed conflicts, including the No Gun Ri massacre in July 1950, when a large number of South Korean refugees were killed by a U.S. airstrike; the Jeju uprising on Jeju Island followed by a brutal anti-communist suppression campaign that lasted from April 1948 until May 1949; and the Gwangju massacre in May 1980, in which protesters against martial law were attacked by government paratroopers.

Appalled by the atrocities their troops had committed in Vietnam, many members of the Korean intelligentsia have not held back tears while attending commemorative ceremonies held in Vietnam.

At the other extreme, many Korean war veterans, who take great pride in having devoted their youth to their country’s welfare and growth during the 1970s and 1980s by fighting in Vietnam, have denied that any mass killings took place.

Some have attacked the Hankyoreh 21 office, stealing documents and claiming that massacres are merely a “figment of the newspaper’s imagination.”

Undaunted, the Hankyoreh 21 launched an apology campaign in February 1999 that lasted until February 2003.

The campaign – which was a call for apologies, financial contributions to support Vietnamese victims and build a peace park in Vietnam, among other activities – was enthusiastically embraced.

One of the many moving stories to come out of the campaign is the equivalent of US$50,000 donated by two elderly women named Moon Myeong Geum and Kim Okiu to build the peace park in the south-central province of Phu Yen.

The amount was given to them by the Japanese government as compensation for making them “comfort women.”

The term refers to the many Korean women who were forced to work as sex slaves to entertain soldiers of the Imperial Japanese Army during World War II.

The organizers were hesitant to receive the donation from the senior duo, who insisted that they take it, explaining that “only victims can relate to and empathize with victims.”

While the women are no longer alive, their generosity and empathy live on.

Designed not only to seek peace of mind and a clear conscience but also to promote reconciliation, the apology campaign has attracted the involvement of many Korean non-government organizations.

These organizations include the Vietnam War Truth Commission, Nawauri (I & WE), Korean Council for the Women Drafted into Sexual Slavery by Japan, Asian Peace Alliance and the Jeju Writers' Association.

Their programs cover a variety of activities, ranging from dispatching doctors in Western and alternative medicine to provide medical care and treatment for locals in Quang Nam, Quang Ngai, Binh Dinh and Phu Yen Provinces every year since 1999; building homes for victims in Quang Nam Province; to sending Korean high school and university students to tribute ceremonies and engaging them in truth-finding, amnesty-seeking activities in Vietnam.

Nguyen Tan Lan and Nguyen Thi Thanh, two survivors of the mass slaughters in Binh Dinh and Quang Nam Provinces, were invited to Seoul in April 2015 under an initiative of the South Korean Vietnam War Truth Commission, in a way similar to how the East Asian nation sent its “comfort women” to Japan to call for protection of historical truth and demand an apology.

Huynh Ngoc Van, director of the Ho Chi Minh City-based War Remnants Museum, who accompanied Lan and Thanh during the trip, recalled the two extremes: tears and repentance at the meetings with South Koreans inside, and the Korean veterans’ demonstrations in denial of the massacres outside.

While Lan and Thanh were narrating the story of a slaughtered family, a Korean monk suddenly stepped forward, kowtowing and mumbling “sorry” repeatedly.

A pastor and many others followed suit.

“That took us by complete surprise, as no monks kowtow to secular people in Vietnam,” Van said.

The clergyman, named Myeong Jin, who would not stand up until Thanh and Lan insisted he do so, is the head monk of Bong Eun Pagoda in Seoul.

He revealed that he had fought in the Korean Tiger division in Vietnam in 1972 and 1973, and said he would visit Vietnam and apologize to the victims once more.

The monk, along with other Koreans, arrived in Vietnam three months later, and kowtowed again to extend heartfelt apologies at the War Remnants Museum, Van added.

The Committee for the Establishment of a Korean-Vietnamese Peace Foundation is slated to launch the foundation in late April 2017 to commemorate the 42nd anniversary of the end of the American war in Vietnam.

The committee is also working hard to erect the ‘Vietnam Pieta’ statue, the work of married Korean couple Kim Seo Kyung and Kim Eun Sung, in both South Korea and Vietnam.

The statue takes the form of a mother embracing a child, whose eyes are closed and whose hands are slightly clenched against his body, protecting him from the outside world.

The committee is providing support for a photo exhibition on the Phong Nhat-Phong Nhi massacre, which Korean reporter Koh Kyoung Tae launched in Seoul in early September.