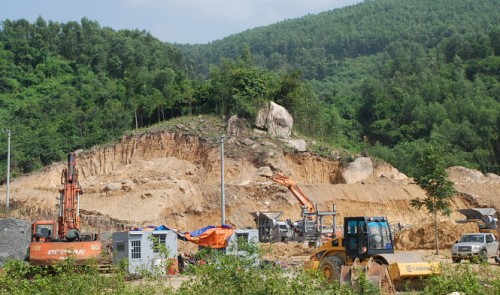 A boom in construction and quarry mining in some outlying areas in the central Vietnamese city of Da Nang has gnawed mercilessly on the local environment, adversely affecting locals’ life.

Hills and mountains in Hoa Nhon and Hoa Phong Communes in Hoa Vang District are not the only victims of the aggressive expansion of construction projects in the area.

From National Highway 14B, neighborhoods in hills once shrouded in greenery are looking more and more unkempt by the day, with patches bare of trees and exposed rock starting to dot the area and putting local residents at risk of natural disasters from strong winds and heavy rains.

The invasive construction work is also turning daily routines into everyday risks for the area’s residents.

On a dirt road regularly sprayed with water by residents to minimize dust, dump trucks overloaded with construction materials barrel through at breakneck speeds on their way to construction sites.

The bulky trucks occupy both lanes on the two-lane path leaving motorcyclists in a difficult position as they attempt their commute.

When trucks pass by on their way to the sites, cars and motorcyclists are forced to a sudden halt in order to avoid collision.

On a recent day, two Tuoi Tre (Youth) newspaper reporters attempting to drive along the route were forced onto the sidewalk as a convoy of trucks rumbled past.

“Whether it’s rainy or not, the dirt road is slushy because we are forced to spray it with water to minimize the amount of dust we inhale. The vans also wreak serious havoc on the road’s surface,” Le Hung, a local, lamented.

“The speeding vans often skid to an abrupt halt at night, causing a ruckus and waking everyone from their sleep as early as 3:00 am,” he added.

Hung revealed that the municipal administration has allowed the mining at nearly 12 locations nestled in Hoa Nhon and Hoa Phong to continue over the past six years.

The Tuoi Tre reporters tailed the last truck of the convoy heading to the quarries.

As the reporters drove, they went past houses and trees blanketed with dirt and dust. The pair could not help but notice the extreme lengths each household had taken to keep their home tightly shut to combat the air and noise pollution.

Tran Trung, another local resident, commented that even the trees in the area seem to be dying from constant exposure to the dust.

The recklessly speeding trucks terrify both children and adults, forcing parents to keep their kids away from the sidewalks and even send them to their grandparents’ to protect them from respiratory ailments and accidents, Trung said.

Many families have even ‘evacuated’ their houses and left for more livable areas.

Vo Thi Duyet, 70, complained that her family and others have suffered severely from constant mining explosions, though they live more than one kilometer from the quarries in Ho Khe Mountain.

“Several residents are experiencing sleep deprivation and are constantly awoken by the thunderous explosions and constant shaking from noon till night. Houses in a 400-meter radius of the mines even experience cracks and other damage due to the relentless tremors,” she said.

Duyet added that the explosions also send rocks and debris tumbling onto roofs in the vicinity and blanket the air with the pungent smell of dynamite.

According to Le Van Tuan, head of Phuoc Thuan Hamlet, only a handful of the 185 local households are still farming the area, though they have been confined to just one hectare.

“Water flowing down from the mountains typically used for irrigation has now been used by companies to operate their rock crushing machinery, leaving crops dying of ‘thirst’,” he explained.

The mining itself is not the only thing causing problems, for the effects it has had on the local environment has left heavy rains sending rocks tumbling down treeless hills onto the fields below.

Tuan’s statistics revealed between 600 and 1,000 trucks frequent the hamlet during peak hours.

The situation has left residents feeling trapped. Though their houses are only 10 kilometers from the city’s downtown area, the situation has made selling property extremely difficult.

A new road, scheduled for completion in 2017, is expected to curb the trucks barreling past residential areas.

“This, however, is a temporary solution and we suspect truck drivers will still take smaller roads through residential areas. If local authorities continue to grant permits to quarry miners, residents must be evacuated, or the other way round,” Tuan suggested.

The Department of Natural Resources and Environment of Hoa Vang District has confirmed that the municipal administration had granted permits to 12 companies to conduct mining activity at 12 quarries in Phuoc Thuan Hamlet.

Several, who received licenses prior to 2010, are allowed to conduct mining until 2020.

Huynh Duc Tho, chair of the Da Nang People’s Committee, has directed that the municipal Department of Construction work in tandem with other competent agencies to carry out repairs to two roads leading to the quarries, and build some other items, at the expense of the mining companies.

The companies are also requested to clean the environment after their mining activities come to an end.