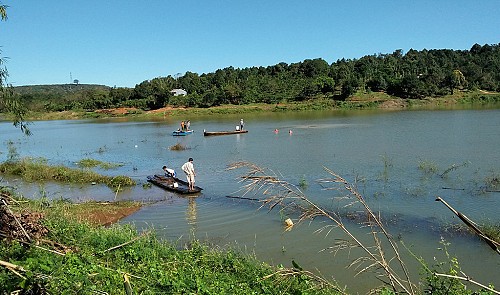 Four relatives have been killed after a raft carrying eight passengers, all relatives, submerged in a river in the southern province of Binh Phuoc.

The tragedy happened in a section of the Lap River in Bu Dang District, with some of the victims losing their lives as they tried to save their family members.

According to preliminary information, three families comprising six adults and two children, all related to each other, visited their relatives on the other side of the river on Saturday evening before returning home on a motorized raft after midnight.

The boat capsized halfway the journey, resulting in the death of four people aboard.

According to the survivors, Cuong managed to carry his daughter ashore before attempting to save his wife.

However, the rescue attempt failed, resulting in the deaths of both of the married couple.

Hanh was able to save his wife before coming back for his son, who had already drowned.

As Hanh attempted to rescue the other passengers, he became exhausted and lost his life, the witnesses stated.

The provincial police department concluded a post-mortem examination and investigation at the scene to identify the cause of the accident on Sunday.

Initial reports revealed that the section of the river was downstream from the Thac Mo hydroelectric plant and the raft was owned by the families.

Tran Van Chung, secretary of the Party Committee in Bu Dang District, said that competent authorities had been dispatched shortly after the accident to assist the victims.

Local leaders have offered between VND2 million (US$88) and VND5 million ($221) to the families of the deceased, Chung added.