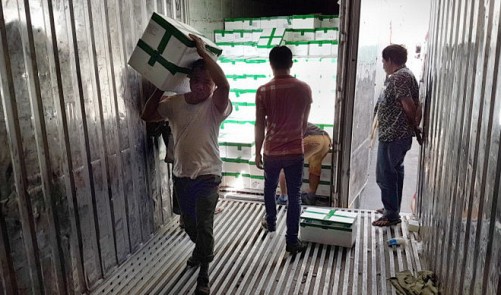 A huge volume of Chinese agro-produce is being transported across the border on a daily basis to Vietnam, where they will be disguised as locally grown or Thai products before being sold to consumers.

Tuoi Tre (Youth) newspaper reporters have gone undercover, following dealers and truck drivers on routes thousands of kilometers long from an ‘open produce market’ in China to the wholesale markets in Vietnam, in order to see how Chinese green produce is able to penetrate so deeply into the Vietnamese market.

Po Chai is considered the largest source of green produce for cross-border sales to Vietnam in southern China. Every day, several hundred metric tons of agricultural produce of all kinds are transported to Vietnam in container trucks.

Most signs at the market are displayed in both Chinese and Vietnamese. On the left hand side of the venue is a large plot of land zoned for suppliers of mushrooms, grapefruits, watermelons, peanuts, grapes, tangerines, oranges and apples. The other side is a multi-hectare parking lot for container trucks exclusively carrying dragon fruits.

At the back of the market is a place for onion and garlic sellers.

Every five or ten minutes, a container truck will leave the market, heading toward the Tan Thanh border gate to enter Vietnam.

Truck drivers claim that up to 80 or even 90 percent of garlic consumed every day in Vietnam originates from the Po Chai market.

Po Chai is an open market in that none of the goods bear any information regarding manufacturers or expiry dates, with mushrooms the only exception.

During the observation by Tuoi Tre in mid-November, some 200 different container trucks using Vietnamese license plates frequented the market. Five of them specialized in carrying mushrooms, 30 were transporting onions and 50 trucks carried oranges, tangerines and apples, all bound for different Vietnamese wholesale markets.

“During peak times when demand in Vietnam is high, more than 100 trucks will leave Po Chai on a daily basis,” Linh, a Vietnamese trader of Chinese green produce, revealed.

Linh added that at the Tan Thanh border gate, there are more than 50 Vietnamese companies specializing in importing Chinese agricultural products.

In a typical scene observed by Tuoi Tre, one truck with the license plate of the northern Vietnamese province of Bac Giang arrived at the market at 2:00 pm, and was quickly loaded with boxes of Enokitake mushrooms.

The mushrooms were put into 150g bags, bearing labels in Vietnamese and English, saying they are Chinese products with a 30-day expiration date from the packaging date of November 15. However, there was no information regarding its manufacturer or place of harvest.

The truck driver revealed that he would take the mushrooms to Hanoi.

Speaking to Tuoi Tre, the Vietnamese driver of another truck waiting to carry Chinese grapefruits made no secret of the fact that the fruits would be on sale as domestically grown grapefruits for VND25,000 (US$1.1) each once they had entered Vietnam.

He added that the Chinese tangerine would be sold as Thai-grown fruit in Vietnam.

In addition to observing trucks picking up goods at the Po Chai market, Tuoi Tre also investigated how these cross-border imports passed customs at the Tan Thanh border gate.

On one day, correspondents followed a container truck registered to the southern Vietnamese province of Tien Giang, after it picked up some 1,470 20kg bags of garlic, or 29.4 metric tons, at Po Chai at 12:00 pm.

The truck then left Po Chai for Tan Thanh, where it quickly completed the exit-entrance procedure, before stopping at the goods-checking zone, located some distance from the border gate.

The truck spent around two hours at the checkpoint, where the driver ate lunch and took a short break. He then left and drove straight to Hanoi once he had received a set of papers from a woman.

Tuoi Tre managed to obtain and review those papers and found out that the garlic shipment was imported by a company named ĐP in Lang Son, a northern Vietnamese province bordering China, and distributed to a man named Binh in the southern province of An Giang.

The importer, ĐP, declared the imports to consist of 750 bags of garlic, weighing 15.22 metric tons, with a taxable value of VND83.5 million ($3,728). This was only half of the actual weight of the shipment.

Also among the papers was a quarantine certificate, which stated that it had been “issued following a test on samples taken in the truck” even though the truck’s container had never been opened.

Tuoi Tre also discovered that the aforementioned ĐP company’s container truck had deliberately given wrong information on not only the weight of the shipment, but also the prices of the product.

Linh, the dealer of Chinese green produce, said that this is a trick used by all Vietnamese traders at Po Chai.

“That’s the unwritten ‘rule’ followed by everyone.”