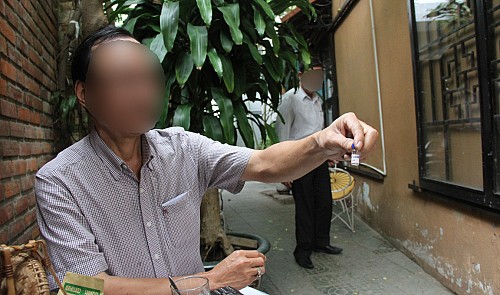 Cancer patients in Vietnam are falling prey to scams targeting their helpless situation, resulting in serious medical complications and the loss of large amounts of money.

A group trading in unofficial medicine that it claims can cure cancer is using the desperation of cancer patients and their families to make a killing.

During an interview with Tuoi Tre (Youth) newspaper, L.X.D., one of the scam’s victims from the central city of Da Nang, recalled that his 42-year-old wife, P.H.T.N., was diagnosed with advanced lung cancer in October 2015 before being admitted to the Ho Chi Minh City Oncology Hospital for treatment.

Shortly after doctors at the infirmary told D. that his wife’s condition was serious and incurable, he was introduced by a friend to a new type of medicine he believed could help his wife.

“It was our last resort and the situation was desperate. We were not in the right state of mind to fully consider our decision,” the man stated.

D. later contacted a man named Minh and was charged US$60,000 for a pack of 24 jars of medicine labeled “CZ Biomed corp Rvlysis,” said to be imported from the United States.

After selling his valuables, D. was able to afford the medication and had hope the ‘remedy’ might save his wife’s life.

After being injected with the drug, though N.’s condition was alleviated she eventually suffered a half-body paralysis.

The patient was again brought to a hospital in Ho Chi Minh City, where doctors mentioned a similar case in which the victim passed away three months after using the medication.

D. then showed the small, poorly labeled CZ Biomed corp Rvlysis jars to Tuoi Tre reporters, who noted the medication had neither a serial code nor expiration date.

T., another victim from Hanoi, whose father was in the final stage of lung cancer, recounted a similar situation earlier in October.

The woman was approached by a member of a forum for cancer patients who stated his illness was cured by a type of panacea.

After receiving the phone number for the medication provider, T. contacted the scammer, who offered a treatment course of 12 bottles of medicine worth $48,000.

To earn her trust, a man introduced himself as the director of CZ Biomed Corporation in Asia, boasting that a lung cancer patient had just recovered after four months of treatment.

The swindlers even told T. to contact the family of N. to see how effective the drug is.

“I was on a business trip to Da Nang at the time and had an opportunity to visit N. and acknowledge her situation,” the Hanoi woman said.

According to a doctor at the Da Nang Hospital, such medication has not been verified to cure cancer, resulting in uncertain effectiveness and scientific value.

No doctor will prescribe the unapproved medicine to their patients because it poses potential dangers and complications, he added.

The drug is mainly imported into Vietnam through passenger luggage and introduced to patients via word of mouth, the practitioner continued.

Tran Van Thuan, director of K Hospital in Hanoi, stated that multiple types of medicine have been advertised to remedy cancer.

Some drugs are still in their research phase and their effectiveness on humans has not been proven, Thuan elaborated.

“The sale of these drugs must be monitored. People should only rely on medicine approved within the oncology sector,” the director asserted.

According to the Ministry of Health, the CZ Biomed corp Rvlysis is neither included on the list of regulated medicines in Vietnam nor any other country in the world.