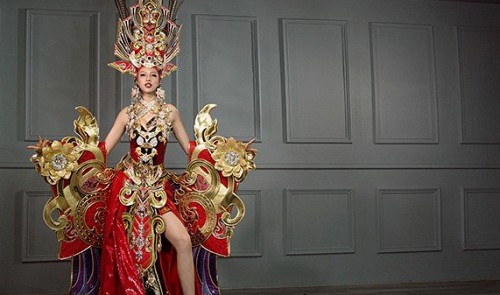 Is the national costume of Vietnam’s beauty at Miss Supranational national enough?

The national costume to be worn by supermodel Kha Trang on the stage of the 2016 Miss Supranational beauty pageant has given grounds to debate on the gown’s representativeness of Vietnamese costumes.

The 45kg costume, named ‘Vietnamese Golden Lotus,’ was put together by local designer Le Long Dung over the course of three months.

The red and gold costume is over three meters high and boasts a 3.5-meter tail, decorated with bright-colored gems and traditional ethnic patterns.

According to the designer, the piece of clothing is inspired by the tale of Lac Long Quan and Au Co, who are believed to be the parents of all Vietnamese people.

The arms of the gown form the shape of a lotus, considered Vietnam’s national flower that stands for purity and perseverance despite circumstances, while the headwear is highlighted by pheasant tail feathers.

The dress will be worn by Vietnamese supermodel Kha Trang at the 2016 Miss Supranational, which will take place in the town of Krynica-Zdrój in Poland on December 2.

However, the gown has been in for mixed public reception, with proponents finding it “fascinating” and “a breath of fresh air” compared to the familiar ao dai, a type of traditional Vietnamese dress with tight-fitting, double-flapped silk tunic worn over pants.

The ao dai has been Vietnamese beauties’ go-to costume for such international pageants.

“I think it’s high time we updated our mindset on the definition of national costumes, as there are as many as 54 ethnic groups in Vietnam, each with a different set of cultural values,” Facebook user Thanh Nguyen wrote in a comment. “Ao dai is not the only national costume of Vietnam.”

Meanwhile, critics of designer Le Long Dung’s gown say they are fine with the costume being worn by a Vietnamese beauty at the pageant, but to call it a national costume is where they find it “hard to understand.”

“I think it gives off a more Thai or Cambodian impression than a Vietnamese one,” Facebook user Dan An Giang wrote.

In an interview with Tuoi Tre (Youth) newspaper on Wednesday, designer Le Long Dung addressed both critics and supporters of his dress, saying he was grateful for comments from both camps.

“However, we should take into account the fact that this is a beauty contest, not a competition on restoring Vietnamese costumes,” Dung said. “As we are living in the modern age, it is necessary to incorporate both traditional and modern values [into the design].”