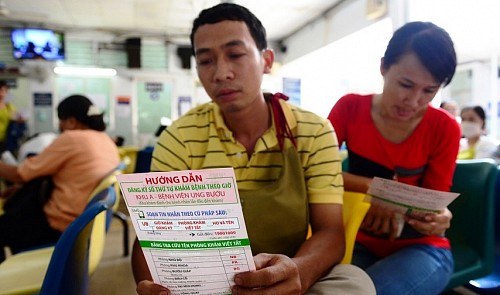 A new application at several hospitals in Ho Chi Minh City has allowed patients to arrange for their health check via a single text message, meaning they no longer have to wait hours before seeing a doctor.

The Ho Chi Minh City Oncology Hospital in Binh Thanh District and the Go Vap Hospital in the namesake district have both been providing their patients with the new service, allowing them to register for a doctor’s appointment via an SMS.

Many patients have expressed their joy as they are no longer required to wait for their numbers to be called as in other public infirmaries in the southern city.

Ho Thi Anh Nguyet, a 62-year-old patient from the Central Highlands province of Lam Dong, has spoken of her experience at the Oncology Hospital on November 18.

The message cost VND1,000 (US$0.04), Nguyet said, adding that the service was extremely convenient and saved her a lot of time.

According to Dr. Diep Bao Tuan, deputy director of the infirmary, the ‘smart’ service was initiated in early October.

A survey was later conducted on 1,263 users of the application, with 96 percent responding that they were satisfied and were able to manage their time more effectively because of it, Dr. Tuan said.

The service has also been vital in preventing overloading at the facility, the deputy director said, adding that about 1,800 people came to the hospital on a daily basis, 75 percent from other provinces across Vietnam.

Many patients arrived very early in the morning but still had to wait long hours before being able to see their doctors.

People are currently able to use the service between midnight and 4:00 pm, he said, adding that the window would be expanded to facilitate patients who would like to register for their health check a day in advance.

Benefit for both patients and doctors

According to Pham Huu Quoc, director of the Go Vap Hospital, they had offered a similar service for about a year.

Thanks to the new application, patients no longer have to waste their time waiting or risk getting infected by other sick people.

In addition, doctors can estimate the number of patients they see in a day, enabling them to relax at work, Quoc continued.

The management of patient records has also improved with the new service, he added.

The municipal Department of Health has urged other hospitals in the southern city to apply the use of similar technologies to enhance convenience and service to patients.