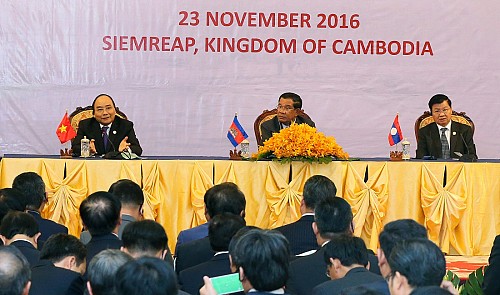 Vietnamese Prime Minister Nguyen Xuan Phuc and his counterparts from Cambodia and Laos were attending the ninth Summit of the Cambodia-Laos-Vietnam (CLV) Development Triangle Area in Siem Reap, Cambodia.

Speaking at the event, PM Phuc called on the three nations to enhance their collaboration in economic matters to foster competitiveness, attract investment, and expand the market.

Cambodia, Laos, and Vietnam should build a stable and open legal framework that facilitates the cross-border circulation of goods, services, and laborers, the Vietnamese premier continued.

The head of government listed several proposals that could be applied in the near future to cement the relationship between the three countries, including the establishment of mechanisms allowing the free movement of vehicles registered to provinces inside the triangle area, and simplified customs procedures at some border gates.

Regular dialogue mechanisms between governmental offices in the three countries and local businesses should be formed to promptly solve any emerging issue in their operations, according to the prime minister.

He stated that the three governments should work together to build programs to facilitate official development assistance (ODA) mobilization and promote investment and tourism in the nations.

Viettel, Vietnam's largest mobile network operator, is set to develop the 4G technology needed to modernize the telecom networks in the three countries and assist in building their e-government systems.

During the gathering, the three leaders discussed the current situation and developmental potential of their cooperation.

The premiers affirmed strong commitment to environmental protection, climate change response, water resource management, cooperation in hydrometeorology and the sustainable management and use of natural resources.

Joint efforts will also be made in bomb and mine clearance and the fight against drug smuggling, human trafficking, terrorism, and cross-border crimes to ensure the safety and security of people and businesses.

At the end of the summit, the leaders signed a joint statement and approved a list of 15 projects to be prioritized in order to mobilize investment capital and boost development in the area.

Talks between Vietnam and Laos will continue when Vietnamese Party Chief Nguyen Phu Trong and a delegation of high-ranking Vietnamese officials make a trip to Laos on Thursday, according to the Vietnam News Agency.

During his trip, the leader will join talks with Laotian leaders to continue discussing on the relationship between the two nations.