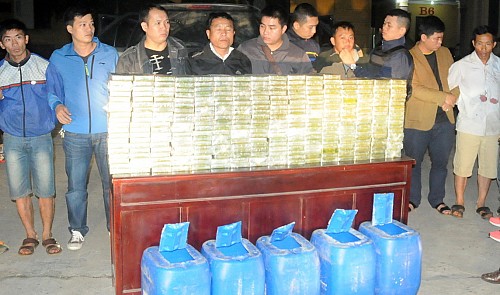 Vietnamese police have arrested four people and seized 300 bricks of heroin transported by car through a northern province.

Police officers in the northern province of Phu Tho said on Sunday that they had nabbed four men carrying a huge amount of heroin on Saturday night.

The officers pulled over two cars at 11:00 pm while they were traveling at high speed in Viet Tri, the provincial capital.

Police discovered 300 bricks of heroin in five blue plastic containers hidden in one of the two cars. A brick usually weighs 350 grams.

All four hail from the northern mountainous province of Son La.

Cang admitted to investigators that they were transporting the heroin for sale.

Under Article 194 of the Vietnamese Penal Code, twenty years of imprisonment, life imprisonment or capital punishment can be given to those who are convicted of illegally stockpiling, transporting, trading or appropriating heroin or cocaine weighing 100 grams or more.