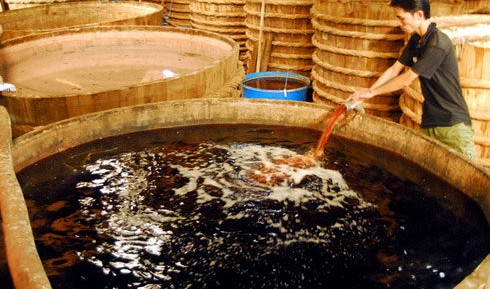 The government gave an answer on Tuesday to one of the most burning questions emanating from a report that sparked false concern over the safety of traditional Vietnamese fish sauce: who sponsored the controversial survey?

Misleading findings about the safety of Vietnamese fish sauce, as claimed in a report released in mid-October by the Vietnam Standards and Consumers Association (Vinastas) overshadowed a government meeting in Hanoi on Tuesday, with the media demanding the state give more details about the case.

The meeting came hot on the heels of a public apology issued by Vinastas, which was also blasted for its lack of sincerity as the non-profit association put responsibility for the survey on its team members instead of its leaders.

Despite the apology, the media has continued questioning the government over what the exact violations of Vinastas are, how they will be penalized, and whether there was a commercial sponsor behind the controversial survey.

“The survey was carried out under the sponsorship of T&A Ogilvy JVC Ltd., contravening the rule that it be independently conducted,” Minister Dung said.

The Government Office chairman added that Prime Minister Nguyen Xuan Phuc has been briefed of all violations by Vinastas.

Vinastas has been under fire since its survey last month claimed that over two-thirds of the 150 fish sauce samples it tested contained more than the maximum allowable level of arsenic content per liter (1 gram).

It was discovered later that the non-profit organization had deliberately released its findings in a misleading way, causing unnecessary fear among consumers.

According to the Ministry of Health, arsenic exists in both organic and inorganic forms, but only the latter is toxic. The arsenic in traditional fish sauce is organic, and Vietnam’s food watchdog sets no limit on organic arsenic content in fish sauce.

Traditional fish sauce is made from fermented fish, and only contains the non-toxic organic arsenic, while mass-produced sauces are made with artificial flavoring. The Vinastas survey suggested that traditionally-made sauces were toxic.

It was widely believed that the association had been sponsored to conduct the survey and released the findings in a deliberately misleading way.

T&A Ogilvy JVC Ltd. is a venture formed in 2009, after Ogilvy & Mather, a WPP company, acquired a majority stake in Hanoi-based T&A Communications, a leading public relations agency in Vietnam.

The venture formalizes a working relationship that T&A Communications has had with the Ogilvy Public Relations Group since 2002, Ogilvy & Mather said in a press release in July of that year.

T&A Communications was formed in 1996 in Hanoi and has grown to become one of the country's leading public relations companies, with a branch office in Ho Chi Minh City.

Tons of rat meat is consumed every day in southern provinces

​​Vietnamese grandma pursues passion for music in her 80s